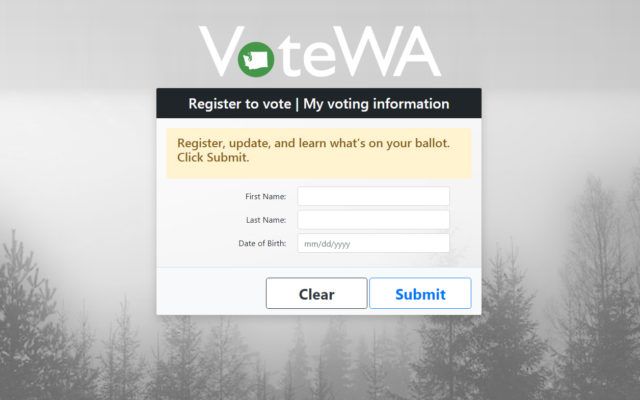 With the 2020 General Election only days away, the Office of the Secretary of State is reminding voters that VoteWA.gov, the state’s voter registration and information portal, is the only official source to check the status of their ballots.

Over the past few days an unofficial website, votewashington.info, has been referred to on social media platforms as a source for voters to find information about whether their ballot has been rejected. The Office of the Secretary of State issued a statement on social media platforms Tuesday morning, noting the site was reported to the Department of Homeland Security (DHS) as misinformation, and that it was not a verifiable source of election information.

Officials with DHS were able to identify the site developers, and coordinated a virtual meeting between them and the Office of the Secretary of State Wednesday afternoon.

“I appreciate the developers of votewashington.info coming to the table to discuss the concerns my office had with the site and to share more about how and why the site was created. They shared with me that the site was not created for nefarious purposes, and confirmed the site used data from the publicly available Voter Registration Database and daily ballot return statistics, or ‘matchback,’ file my office updates each weekday during an election period. These files may be accessed from the Secretary of State’s Office’s official website; the votewashington.info developers did not coordinate with the Office on the development of their site.

“Most concerning, the website produces a potentially misleading list that is not updated in real-time of Washington voters whose ballots have been ‘rejected’. No ballot that has been returned for the 2020 General Election has been rejected. The term ‘rejected’ is a system code that signals to county election officials the ballot cannot be tabulated until the issue has been resolved. Most often, ballots marked as ‘rejected’ are missing a signature or the signature applied does not match the one on file in the voter’s registration record. County election officials reach out to voters whose ballots are missing signatures or the signature does not match to resolve the error. Voters have until 20 days after Election Day to ‘cure’ their signature.

“To help combat some of the false information circulating on social media about rejected ballots, my office has provided the developers descriptions for the various, temporary challenge codes that can be applied to ballots during processing. The developers also posted a disclaimer on their homepage that it is not an official site and encourages voters to visit VoteWA.gov for their public voter information.

“The Office of the Secretary of State can only endorse official sources of information. VoteWA.gov is the official statewide source for Washington voters to check their most up-to-date ballot status. These next five days, and even after the election, I urge voters to rely on trusted sources for their elections and voting information, like VoteWA.gov, the official website of the Office of the Secretary of State, and resources produced by county election officials. Voters who have questions about the status of their ballot are encouraged to contact their county elections office.”

The Office of the Secretary of State is participating in #TrustedInfo2020, an information campaign spearheaded by the National Association of Secretaries of State to encourage voters to consume elections information from credible, reliable sources, like secretaries of state’s offices and other election officials.