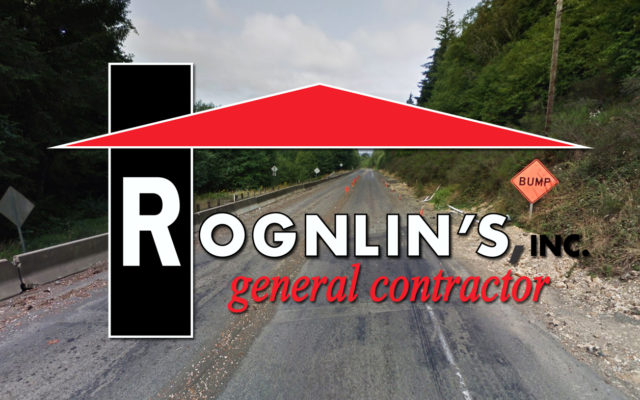 Cosmopolis, WA – Rognlin’s, Inc. is set to do the work on Cosi Hill as well as the Chehalis River Bridge.

The Washington State Department of Transportation have announced that Rognlin’s, Inc. was awarded the contract to stabilize the US 101 hill outside Cosmopolis.

$7,886,000 has been approved for the project through pre-existing funding.

For the project, crews will stabilize the slope of the US 101 hillside, repairing the site after a large, slow-moving landslide under the highway has sloughed away portions of the roadway. Repeated slides near milepost 79 have brought repeated road closures. Since December of 2015, the speed limit has been reduced in the area.

WSDOT said, “…maintenance crews have repeatedly patched the roadway through the area, but additional geotechnical earthwork is required for more permanent repairs. Those temporary fixes have proven to only last until the next heavy rainstorm hits.”

The goal of the project would be to reduce the risk of earth movement that could lead to unexpected roadway closures.

Rognlin’s, Inc. crews are set to begin this summer, drilling 6-foot-diameter columns nearly 50 feet deep. The columns will be filled with rock to dramatically stabilize this stretch of highway. About 600 shafts will form a buttress to support the roadway.

According to WSDOT, “The rock-filled shafts will help securely hold the hillside in place, reducing the potential for the roadway pavement to move.“

Crews will reconstruct and repave the roadway once the hill is stabilized.

Drivers will encounter shifted lanes and reduced speeds until late fall 2020 during this two-year construction project.

In February, Rognlin’s Inc. was also  named as the low bidder on the project to do structural rehabilitation and painting on the Chehalis River Bridge outside Montesano.

Travelers who wish to receive updates on these and other state highway projects in Grays Harbor are encouraged to sign up for Grays Harbor County maintenance and construction email alerts.

As a reminder, traffic fines double in work zones and cannot be reduced, suspended, or waived.

WSDOT also states; Drivers who remove, evade, or hit safety devices on purpose can be found guilty of roadway worker endangerment. This is classified as a gross misdemeanor with a 60-day license suspension. You can read about these laws at: