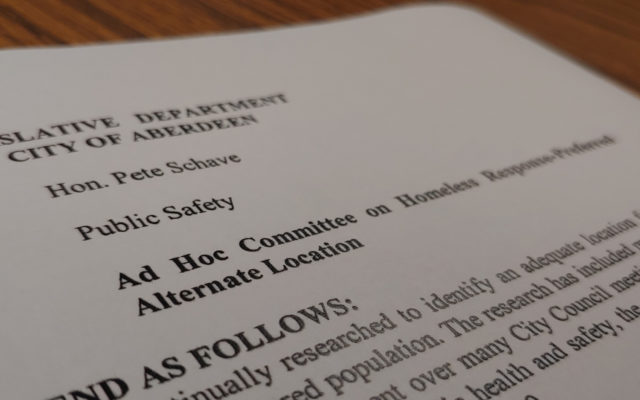 The City of Aberdeen has been asked to close the TASL by their ad hoc committee.

In a report from the Ad Hoc Committee of Homeless Response submitted to the Aberdeen City Council for this week’s meeting, they are recommending that the Temporary Alternative Shelter Location, or TASL, be closed in Aberdeen due to lack of non-city funding.

In the report, they say that despite requests to Grays Harbor County Public Health and Social Services and the Washington Department of Commerce, and state and federal officials, no non-city funding is being provided to support operations of the TASL.

It also states that there is also no substantive operations support being offered by private of faith-based organizations.

The report goes on to say that the public health authority has provided homeless and unsheltered programs based on state law, and that in their most recent response to the City request, they “declined through counsel” to consider on-going operation of the TASL as “an appropriate use of the funds to address the public health crisis”.

Due to these issues, the committee is recommending providing notice to close the TASL on May 15, 2020.

This report will be reviewed at the Wednesday City Council meeting, which will be held using telephone audio conferencing.

The public will be able to listen to the meeting beginning  at 7:00 PM on Wednesday, April 8th, 2020, although the teleconferencing will not include public comment periods for the immediate future.

To participate in listening into the City Council meeting, please call the following Telephone Number: 1 (425) 585-6257.

If you wish to submit any comments in advance, please email your comments to the City Clerk, Cliff Frederickson, [email protected], and they will be shared with City Council. Please be sure to put “CITY COUNCIL PUBLIC COMMENT” in the subject line.

The City of Aberdeen requests that you provide your full name and ward number, or City if you are not from Aberdeen.