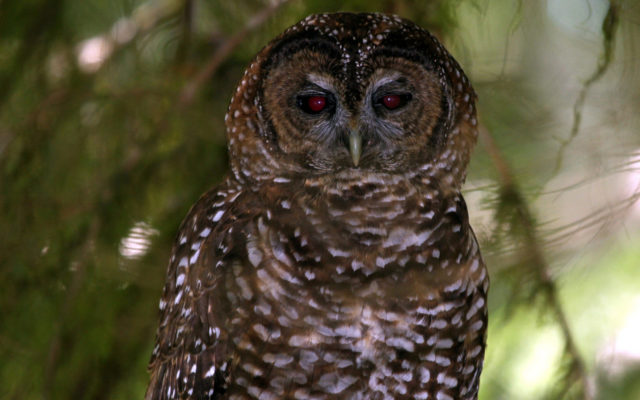 The U.S. Fish and Wildlife Service has designated 6,105,278 acres of critical habitat, plus an additional 2,000,000 habitat acres within wilderness areas and national parks for the northern spotted owl.

While there is land being added in numerous areas of Washington, Oregon, and California, it does not include lands in Grays Harbor or Pacific County. In fact, no new land on the Olympic Peninsula is included in the change.

This final rule complies with a settlement agreement regarding a legal challenge brought by labor representatives, the timber industry and several counties within the range of the northern spotted owl.

Approximately 3.4 million acres have been excluded from the 2012 critical habitat designation in Washington, Oregon and California.

The excluded lands include all lands reinvested to the United States as Oregon and California Railroad Reinvested Lands, known as the O&C lands. According to the congressional enactments governing these lands, they are to be managed primarily for sustained yield timber production. The excluded lands also include those designated as matrix lands under the Northwest Forest Plan and are to be managed for multiple use and sustained yield.

“The Association of O&C Counties (AOCC) strongly supports the decision by the U.S. Fish and Wildlife Service to exclude all O&C lands from the 9.5 million acres previously designated as “critical habitat” for the northern spotted owl. This is a result AOCC has been seeking for a very long time, and we are pleased the agency agreed with us,” said Tim Freeman, a Commissioner of Douglas County and President of AOCC.  “After 80 years of sustained yield management, over half of the O&C timberlands remain late-successional forest.  Sustained yield management of these lands can continue to provide many forest values, including owl habitat, while simultaneously supporting the social and economic needs of the rural communities in Oregon. We are delighted to see rational and positive decision making by the federal government.  It has been a very long process, and there is still more to do. But this is a major step in the right direction.”

Finally, the exclusions include approximately 20,000 acres of tribal lands that were recently transferred under the Western Oregon Tribal Fairness Act to the Confederated Tribes of the Coos, Lower Umpqua and Siuslaw Indians, and the Cow Creek Band of Umpqua Tribe of Indians and 211 areas within the White Pass Ski Area Special Use Permit.

The northern spotted owl is protected under the Endangered Species Act, and as defined by the ESA, critical habitat contains the physical or biological features that are essential to the conservation of listed species and that may need special management or protection.

The ESA also specifies that lands may be excluded from a critical habitat designation if the benefits of exclusion outweigh the benefits on inclusion of those lands, so long as the Secretary determines, based on the best scientific and commercial data available, that exclusion will not result in extinction of the species.

Critical habitat does not provide additional protections for a species on non-federal lands unless proposed activities involve federal funding or permitting. Critical habitat designations also do not affect land ownership or establish a refuge, reserve, preserve or other conservation area, nor does it allow the government or public to access private lands.

The final rule is available online at https://public-inspection.federalregister.gov/2021-00484.pdf. For additional information regarding critical habitat and the Endangered Species Act, click here.