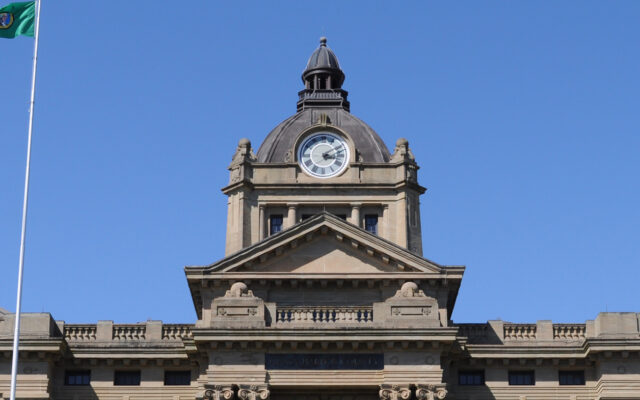 After years of maintenance issues, the more than a century-old Montesano Courthouse clock has been fixed and residents can once again look to it for the accurate time.

“The county has updated the clockwork with a new control system,” said Grays Harbor County Director of Utilities, Facilities, and Community Development Mark Cox. “The original clockwork from 1910 suffered some major technical issues and it was no longer sustainable to make repairs to the historic unit.”

According to a release, in May 2021 the plan was to repair the original clockwork inside the historic building. After a contractor was found and parts were shipped it was found that the internal workings were beyond repair.

“The new control unit is self-correcting and it will automatically adjust for daylight saving time and after power outages,” said Cox. “The system will lose less than one minute of accuracy in four years of operation, so you can now feel safe setting your clocks to county time!”

Despite the updates, the clock will look the same as it has for more than a century, “it’s more than 7-foot wide clock faces, 14-inch numerals, and the LED rope lights that illuminate it at night. It’s the guts of the clock, out of sight, that have changed”.

Such a historic piece of equipment in such a historic building won’t be scrapped, however, it will be preserved and put on display.

“We all love our historic clockwork and many of us hate to see it taken out of service, but fret not, the clockwork will be reassembled and put on permanent display in the county courthouse,” assured Cox.