The Washington Department of Fish and Wildlife (WDFW) expanded closures on sport crab fishing today (Dec. 28) to include coastal waters between Point Chehalis and the Queets River. Previous closures remain in effect for Marine Area 1 (Ilwaco) and Marine Area 2 (Grays Harbor and Willapa Bay) due to elevated marine toxin levels.

“We wish we had better news, but our first priority is public safety,” said Dan Ayres, WDFW coastal shellfish manager. “The Department of Health will continue marine toxin sampling in all marine areas as weather and ocean conditions allow. Our decision on whether or not to open crabbing areas will be based on these sampling results.”

Inside the Columbia River (from the outer jetty tips upriver) and Marine Area 3 (La Push) and Marine Area 4 (Neah Bay) remain open given acceptable test results from DOH so far, but crab fishers should keep an eye on the Department’s website given high domoic acid levels in most other coastal waters.

Domoic acid, a natural toxin produced by certain types of marine algae, can be harmful and even fatal if consumed in sufficient quantities. Cooking or freezing does not destroy domoic acid in shellfish.

The state commercial Dungeness crab fishery is also closed and will be delayed until at least Jan. 14 in Washington coastal waters south of Point Chehalis, Grays Harbor, Willapa Bay, and the Columbia River.

Levels of domoic acid have increased in coastal waters over recent months. Earlier this season, the department closed all Washington coastal beaches to razor clam digging due to high levels of the toxin.

DOH recommends that crabbers who are fishing outside of the current closure area remove the crab viscera from their catch to avoid any exposure to possible toxins.

All sport crab gear in the new closure areas must be removed or it will be subject to confiscation by Fish and Wildlife enforcement officers.

November and December closures represent the first time since 2015 that crab fisheries have been closed in Washington due to domoic acid. The toxin was first detected on the Washington coast in 1991.

Regular testing of shellfish species found in the area – including oysters, hard-shell clams and mussels – shows those shellfish remain safe to eat. The exceptions are razor clams and Dungeness crabs. 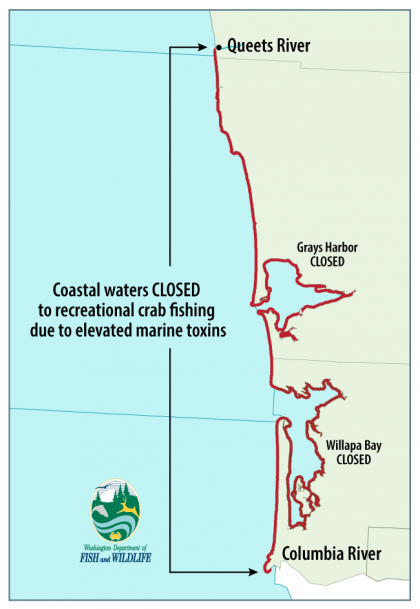