Man drives onto sidewalk at Hoquiam City Hall; says he wants to cut down flag 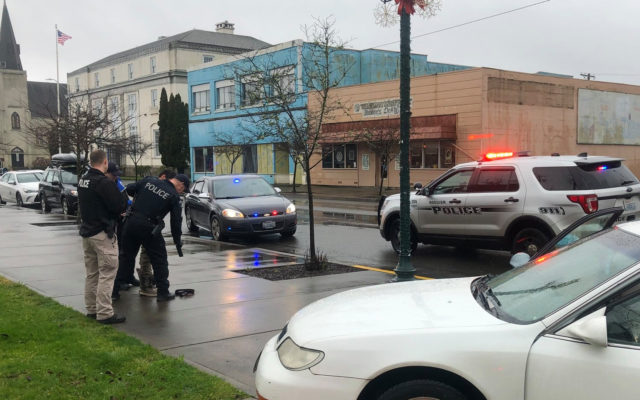 A man trying to cut down a flag in Hoquiam was taken into custody.

According to the report, officers were called when employees at City Hall reported a man out front with a knife.

The man had reportedly pulled up onto the sidewalk in front of the building in a white car, opened both car doors, and turned up the radio volume “very loud”.

The 39-year-old Elma man was seen by employees throwing a double-bladed knife into the grass.

Hoquiam officers responded and the suspect dropped the knife and surrendered without incident, saying that he intended to cut down the flag at the building to provide it to the family of recently deceased Officer Phil High.

During te investigation, Aberdeen Police informed the Hoquiam agency that they had probable cause the suspect had attempted to cut down the American flag at the Aberdeen Post Office.

The suspect was taken to Aberdeen City Jail for their charges and is reportedly well known to law enforcement and has an extensive history of drug abuse and mental illness. The suspect will likely be evaluated by a mental health professional while in custody in Aberdeen.

The vehicle was released to the owner at the scene after she was cited for allowing the vehicle to be unlawfully operated by the suspect as he does not have a valid driver’s license.

The suspect will be submitted for charges to the Hoquiam City Attorney for unlawful display of a knife.