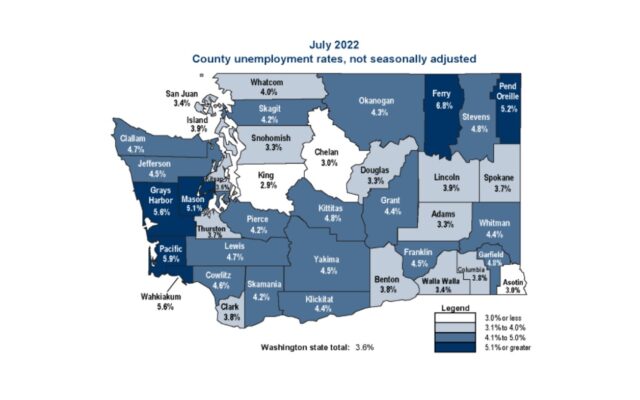 In the county unemployment rates released on Tuesday, the Employment Security Department showed that Ferry County had the highest unemployment within the state by nearly an entire percentage point at 6.8%.

Pacific County sits at second highest in Washington with 5.9%, while Grays Harbor is tied for third with Wahkiakum at 5.6%.

Locally, Grays Harbor saw a slight decrease to the labor force and total employment from June, but the nearly 20% drop from the June numbers brought the unemployment rate down from 6.8% to 5.6%.

Pacific County also saw their labor force grow, and while that force grew by 4 they saw total employment rise by 76.

In comparison to the June numbers, both counties dropped by around an entire percentage point.

For Grays Harbor the July unemployment is even more significant as it is the lowest rate in the county since 1990, for any month, since historical rates are first noted by ESD in 1990.

The total employment and labor force for Grays Harbor throughout these 32 years has stayed reasonably consistent, within a few thousand deviation, not showing a drastic change that would explain the drop in unemployment.

In the statewide figures, Washington state as a whole also saw low numbers when compared historically. The June rate was 3.5% and July was 3.6%, which are the lowest two figures since 1990 as well.

ESD reminds residents that unemployment rates at the county level are not seasonally adjusted because the sample size is too small to accommodate that additional analysis. Therefore, they should not be compared directly to the seasonally adjusted statewide rate published last week. (Monthly employment report.)