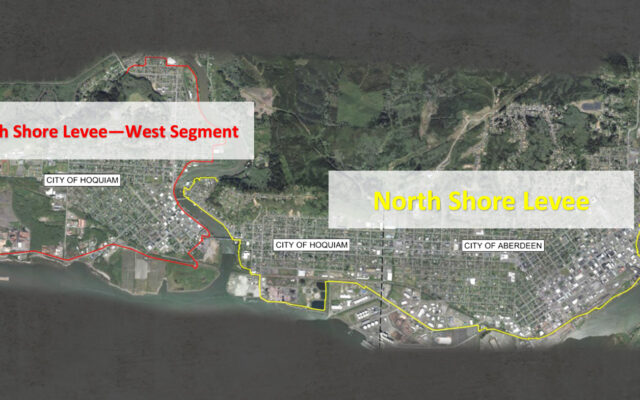 In a release from Kilmer’s office, he says that the funding package, which passed the House with bipartisan support, included $9,950,000 in federal funding for the levee project that aims to provide coastal flood protection, improve the storm drainage systems in the cities of Aberdeen and Hoquiam, and reduce flood insurance costs for local homeowners.

The legislation is expected to be approved by the U.S. Senate and signed into law by President Biden in the coming days.

“Moving forward with the Aberdeen-Hoquiam Flood Protection Project is a win-win. It means the community can address flooding and avoid future property damage. It means the community can enable future investments in affordable housing and economic development in the region by pulling some of these properties out of the flood plain. And it means that we won’t see so much money leave the community to pay for flood insurance payments,” said Rep. Kilmer. “What’s more, the cost of this project shouldn’t fall on the backs of taxpayers in Grays Harbor. The federal government ought to help. That’s why I’m proud that the House has passed new federal funding for the project – and why I’m excited to see the bill signed into law in the coming days.”

The local project consists of two levees, both the North Shore Levee and the North Shore Levee – West Segment, which are needed to protect the Cities of Aberdeen and Hoquiam against coastal flood events between the Wishkah and Hoquiam rivers north of the Chehalis River and Grays Harbor Estuary. The project also includes the construction of the Fry Creek Pump Station.

The North Shore Levee will construct a 6.2 mile levee (earthen, concrete, and sheet pile) across the two cities and provide critical flood protection. The project is meant to build resiliency in the face of future flood events, retaining existing businesses, jobs, and residents which have been on the decline in the community. The total construction cost of the North Shore is estimated to be at least $78 million.

“Congressman Kilmer knows our community and recognized early that our flood control measures in Grays Harbor could not achieve its goals of protecting our people, businesses, and environment without substantial involvement from the federal government,” said Aberdeen Mayor Pete Schave. “Our cities of Aberdeen and Hoquiam came together and created a comprehensive plan with several elements to achieve needed flood control protection. The plan calls for significant resources, through state and federal resources. These federal investments secured through Congressman Kilmer’s efforts will greatly complement the secured local and state funding.”

The North Shore Levee—West Segment, estimated to cost $40 million to construct, will build a levee (earthen, concrete, and sheet pile) for 4.7 miles bordering the west side of Hoquiam. That levee aims to protect local residents and build resiliency in the face of future flood events, as well as retain existing businesses, jobs, and residents which have been on the decline in this community.

“This final approval of $9.95 million in the fiscal year 2022 federal budget for this element of our overall flood control effort shows outstanding leadership by Congressman Kilmer. He successfully made the case to our Congress, and now we can add these federal funds to the secured state and local investments through the Washington State Office of the Chehalis Basin,” said Hoquiam Mayor Ben Winkelman. “Construction on several elements is now scheduled to begin in the near future. This is yet another step in providing significant community and economic benefits to Grays Harbor for the next 50 years and beyond. Additional funding from our partners, including those we have applied for from the Federal Emergency Management Agency, will ensure we finish all elements.”

When completed, the levees will eliminate the need for mandated flood insurance and building code requirements, saving residents millions of dollars, and protect an estimated 5,100 properties and 1,354 businesses.

“The Port of Grays Harbor truly appreciates Congressman Kilmer’s leadership and work in securing this funding,” said Port of Grays Harbor Commission President Tom Quigg.  “The Aberdeen-Hoquiam Flood Protection Project is a benefit to our entire community and will make Grays Harbor a better place to live, work and play as well as support the economic development work we all do to bring jobs, private investment and opportunity to Grays Harbor.”