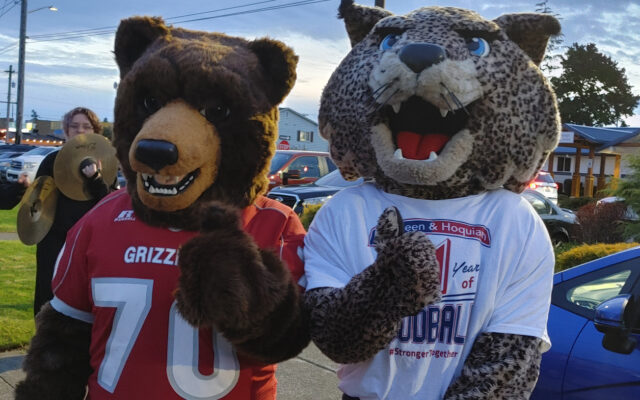 Foodball 2021 has come to a close, with the combined effort of the Aberdeen and Hoquiam schools exceeding their goal for the year.

For the second year in a row, the schools joined forces to raise funds and food for local food banks in the campaign named “Stronger Together”.

Going into the 10-day focus, advisers Ashley Kohlmeier of Aberdeen and Katie Barr of Hoquiam told KXRO that the goal was to raise $70,000 with the restrictions still in place that would hinder some traditional campaigning efforts.

On Monday at the Grays Harbor PUD, students and community members joined together to hear the final result of their work.

At 5pm, the advisors announced that their goal was reached.

The donations will be dispersed by Coastal Harvest in Hoquiam. The nonprofit shared their thoughts on the results.

“The students managed to come through again in tough times,” said Brent Hunter, Executive Director of Coastal Harvest. “I think it’s great they are willing to seek out donations. It all goes for a great
cause: helping people suffering from food insecurity.”

“Compared to last year, each school was able to participate much more and actually interact with our community,” said Ashley Kohlmeier, Aberdeen’s Foodball student advisor.

“We know it’s not a traditional year, but people giving in spite of that because they care … is the most important thing,” added Katie Barr, Hoquiam’s Foodball student advisor. “It was wonderful to see the smiling faces and the kind comments of the community as they watched the kids out in the community working on Foodball.”