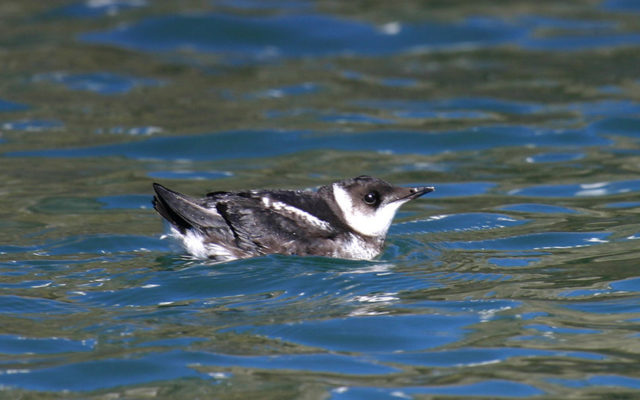 A draft Safe Harbor Agreement has been reached to protect the federally threatened marbled murrelet in Washington between the U.S. Fish and Wildlife Service and Weyerhaeuser Timber Holdings, Inc.

The agreement, posted to the Federal Register, would authorize incidental take of the marbled murrelet, associated with forest management actions on private lands.

The agreement came after Weyerhaeuser applied for an enhancement of their survival permit through the Endangered Species Act.

The document describes actions that would be taken to “achieve a net conservation benefit for the marbled murrelet within its range on enrolled lands in Washington”.

The proposed agreement is for forest management activities associated with 637,021 acres of privately owned lands located in 8 counties in western Washington.

The agreement would allow Weyerhaeuser to maintain or increase potential nesting habitat for marbled murrelet on enrolled lands without incurring additional ESA restrictions.

Under the proposed agreement, Weyerhaeuser would continue to manage their forest lands for timber production in compliance with the Washington Forest Practices Rules (WAC Title 222), which include provisions for the protection of forested buffers along rivers, streams, wetlands, and unstable slopes.

Because the forested buffers are largely deferred from timber harvesting, they represent areas that could support potential marbled murrelet nesting habitat now or in the future.

Under the agreement, Weyerhaeuser would continue to protect all previously documented occupied marbled murrelet habitat on their lands.

Additionally, they will defer harvest in certain areas identified as potential marbled murrelet nesting habitat on enrolled lands for the term of the agreement if approved.

By volunteering to defer timber harvest in certain areas, the proposed agreement protects more forest habitat on their lands than would otherwise be protected under existing forest practices rules.

The marbled murrelet was listed under the Endangered Species Act in 1992.

Under the Endangered Species Act  it prohibits ‘‘take’’ of fish and wildlife species listed as endangered or threatened. Under the ESA, the term ‘‘take’’ means to harass, harm, pursue, hunt, shoot, wound, kill, trap, capture, or collect, or to attempt to engage in any such conduct.

The public is invited to comment on the plan through November 14, 2022.

You may view or download copies of the draft SHA and draft EA and obtain additional information on the internet at https://www.fws.gov/​office/​washington-fish-and-wildlife.

To request further information or submit written comments, use one of the following methods, and note that your information request or comments are in reference to “Weyerhaeuser SHA in Washington.”