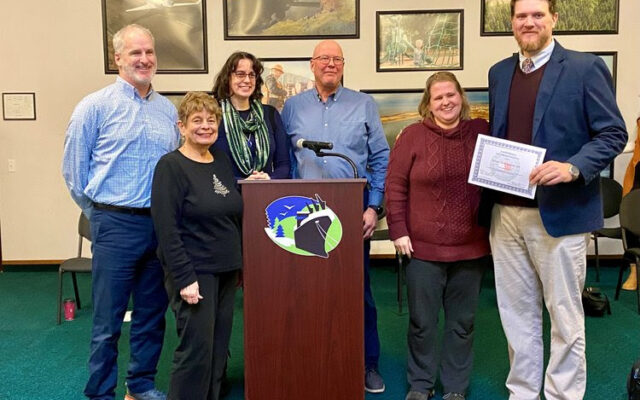 Photo from Port of Grays Harbor

There is a new marine pilot within Grays Harbor.

The Port of Grays Harbor announced that as they prepare for major projects and expansions that will continue to drive growth and cargo activity at its four deep-water terminals, Captain Ryan Leo has become the second licensed Pilot on the Grays Harbor District.

At its recent meeting at the Port of Grays Harbor, the Washington State Board of Pilotage approved Captain Leo to become the second licensed Pilot in the District after his completion of 64 observation trips, 10 tug trips, 54 training trips and 22 evaluations trips.

Captain Leo started with the Port on February 1, 2022.

“We are extremely excited to officially welcome Captain Leo to the Port team.  We are confident his vast experience and commitment to precision piloting and safety will be an asset for years to come for the Port and our customers,” shared Port of Grays Harbor Executive Director Gary Nelson.  “We would also like to thank the Washington State Board of Pilotage and Senior Port Captain Bobby D’Angelo for their dedication and support over this past year during Captain Leo’s intensive training period.”

Leo holds a Bachelor of Science in Marine Transportation and Business Administration from the State University of New York, Maritime College, a Master of Arts in Organizational Leadership with a concentration in Global Leadership from Gonzaga University, and a Master Mariner of Unlimited Tonnage Vessels upon Oceans License issued by the United States Coast Guard.

Prior to joining the Port, he sailed for Matson Navigation and other shipping companies in both foreign and domestic trade lanes.