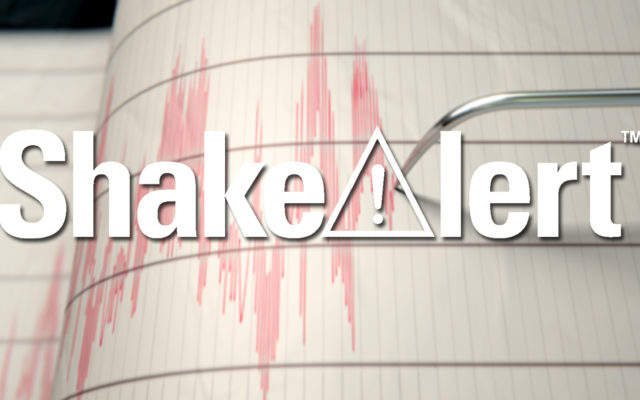 The ShakeAlert® Earthquake Early Warning system will go live in Washington on May 4, completing the West Coast rollout of the new technology.

The system operated by the U.S Geological Survey in cooperation with the Pacific Northwest Seismic Network is capable of giving residents seconds of warning before earthquake shaking arrives.

“Nothing can replace families having an emergency plan in place and being at least two weeks ready,” said Gov. Jay Inslee. “We all know an earthquake could strike at any time. An Earthquake Early Warning system could provide the critical time needed for Washingtonians to drop, cover and hold on. It has the potential to save lives and reduce damage to critical infrastructure.”

According to officials, the system is not earthquake prediction, but it can rapidly detect and provides information about earthquakes that have already begun and includes an estimate of the earthquake size, precise location and the shaking it may produce.

Alerts may be delivered to mobile phones in areas that could experience weak or greater shaking in Washington.

The U.S. Geological Survey and its state and university partners, including the University of Washington, will be adding more seismometers to the network through late 2025 to further enhance the system’s capability.

The sensor network is only about 65% complete for Washington.

Additional work with alert distribution partners is needed to improve the delivery speed of alerts to mobile phones for all earthquakes.

Since the majority of earthquake-related injuries are caused by people getting hit by falling objects or falling down while moving during the shaking, seconds of warning will let people take protective action before shaking begins, reducing the chance of injuries. In most situations, drop, cover and hold on is the recommended way to protect yourself from earthquakes.”

There will be no tests of the system on May 4.

On or before May 4, residents will want to check their phones to ensure that Wireless Emergency Alerts are turned on.

Most carriers have this setting turned on automatically, but some people have chosen to disable them. Learn how at https://mil.wa.gov/alerts

When the system goes live, Google has notified our agency that users of Android phones will have the potential to get notifications through both Wireless Emergency Alerts and their phones’ own built-in software (which doesn’t require a specific app). Users will receive Earthquake Alerts only if they have their device location setting on and Earthquake Alerts enabled in their location settings.

Third party apps powered by ShakeAlert® may also be available when the system goes live in May, allowing residents and visitors to not only enable Wireless Emergency Alerts, but also download mobile apps giving more of a chance to get the warning before shaking arrives. The Washington Emergency Management Division is still working with third party vendors to determine which apps will be available to users in Washington .

This webinar is intended for anyone who wants to learn more about the ShakeAlert® Earthquake Early Warning system in Washington and will be recorded and posted later on our YouTube Channel.

“We will explain what the system is, how it works and the multiple ways you can get alerts on your mobile phone. Experts will share how you can protect yourself before, during and after earthquakes and share tips on how you can be prepared.”

A public webinar will help guide residents on how it works.

Please click this link at 10 a.m. on Thursday, April 29 to join the webinar.