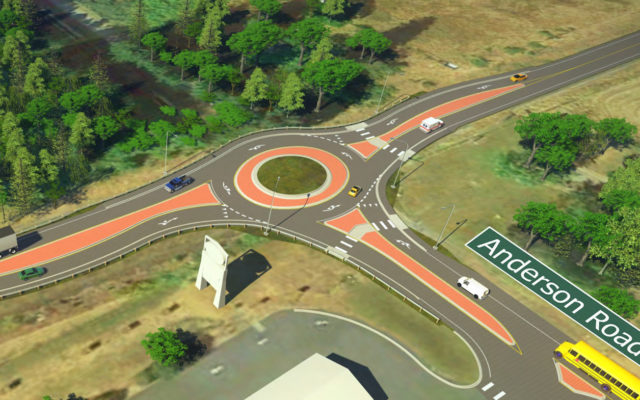 The Washington State Department of Transportation has announced that Rognlin’s, Inc. was awarded the contract to build a roundabout at US 12 and Anderson Rd at the Grays Harbor/Thurston County line.

Anderson Road south of US 12 is described by WSDOT as the main entrance for visitors and freight traveling to and from properties owned and operated by the Confederated Tribes of the Chehalis Reservation.

This roundabout is said to be will be large enough to accommodate emergency vehicles, farming equipment, log trucks and other semi-trucks with trailers.

Originally the project included two roundabouts in the area, with one at Anderson Road and another at Moon Road SW.

According to WSDOT, a decision by Thurston County officials to close 188th St at Moon Rd eliminated the need to construct the second roundabout.

The project had been delayed due to a lengthy environmental process and right-of-way negotiations.

WSDOT says that alternatives to a roundabout were explored, although after review it was decided that a “single-lane modern roundabout” was the most cost-effective and efficient solution “to keep traffic moving while reducing the likelihood and severity of collisions”.

This proposal will permanently close access to Anderson Road north of US 12. Drivers who use that roadway will be able to reach US 12 via Sickman-Ford or Moon Road Southwest. Anderson Road south of US 12 will remain open.

Studies have shown roundabouts in certain instances have the potential to reduce the number of collisions when compared to stop signs or traffic signals. Roundabouts also help save limited state resources since they do not require ongoing maintenance such as the work required for traffic signals.

Construction on the project is set to begin on July 5 and be completed by the fall. Before construction begins, users of US 12 in the Rochester area can get email updates for this project.

An additional roundabout at the US 101/SR 105 intersection is scheduled to go out to bid in May.