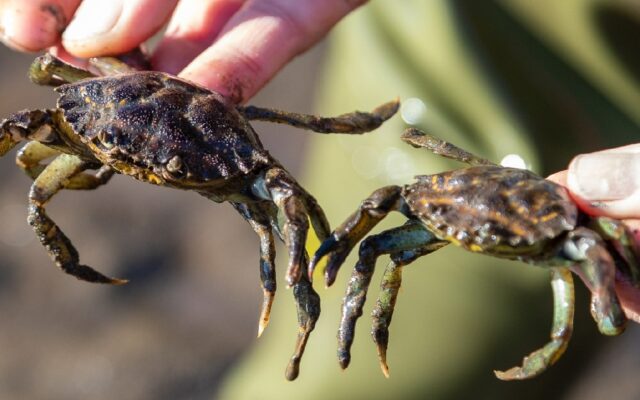 U.S. Representative Derek Kilmer (WA-06) shared that he led a bipartisan group of lawmakers in urging the U.S. Department of the Interior to undertake a review of the efforts of the federal government to combat invasive species in the U.S., including the European Green Crab in Washington.

In a letter to the U.S. Secretary of the Interior, the lawmakers noted that the exponential growth of invasive pests, plants, animals, and pathogens in recent years poses a massive threat to the environment, infrastructure, outdoor recreation, and agriculture.

On September 1, Rep. Kilmer visited Nick’s Lagoon near Seabeck on Hood Canal with leaders from Washington Sea Grant (WSG), the Washington Department of Fish and Wildlife (WDFW), and representatives from local Tribes, to discuss the invasive European green crab and examine its impact on the region.

WDFW contends that potential impacts in this region from the invasive European green crab include destruction of eelgrass beds and estuarine marsh habitats, threats to the harvest of wild shellfish and the shellfish aquaculture industry, the Dungeness crab fishery, salmon recovery, and a array of ecological impacts to food webs.

This latest update also includes a field highlight from Willapa Bay and Grays Harbor, where WDFW is working with local shellfish growers, the Shoalwater Bay Tribe, @waDNR, and others to control and remove European green crabs.#Europeangreencrabs @WAinvasives @nwtreatytribes pic.twitter.com/5TXpXNgCDO

Research shows that in areas where green crab have been able to establish reproducing populations, they have had dramatic impacts on other species, particularly smaller shore crab, clams, and small oysters.

“In western Washington, the European Green Crab in our coastal waters and within Puget Sound is of great concern. This small shore crab with a voracious appetite eats macro algae, smaller native shore crabs, and young shellfish like oysters and clams. Governor Inslee, aware of the damage European Green Crab has wrought in other states and the exponential growth we have seen in Washington state in the past two years, issued an emergency order in January of this year. With the risks to native and endemic species in Puget Sound from habitat loss and predation, the exponential growth of this invasive crab could fundamentally reshape the marine environment of the Puget Sound, one of America’s greatest national treasures. […] And this pattern repeats itself in many of our communities. In the Great Lakes and surrounding water bodies, the introduction of over 180 aquatic species has substantially changed the ecosystem and squeezed the economy.” the lawmakers wrote.

They continued, “The historic $100,000,000 in funding for invasive species in the bipartisan Infrastructure Investment and Jobs Act can help address the challenges outlined in this letter. These resources are urgently needed in communities across America to protect our environments, our native species, our fishermen and farmers, and our tribal communities. We respectfully request that the Department of the Interior continue to partner with state and tribal authorities to tackle this ongoing emergency, as well as prioritize the distribution of invasives species funding through the IIJA. […] These funds are critical to help our communities across the country respond to both emerging and existing invasive species threats.”

The full letter can be found HERE.