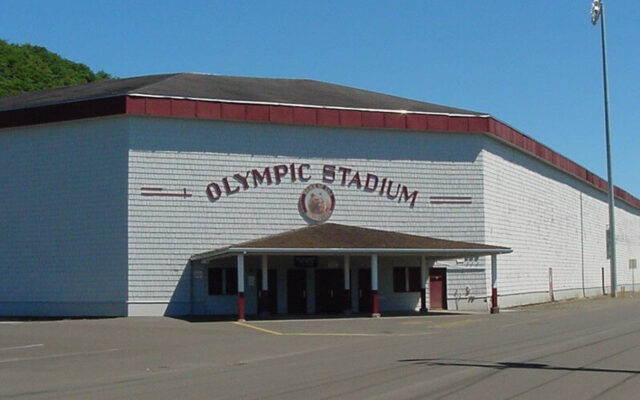 The City of Hoquiam announced that as part of ongoing major renovations at Olympic Stadium, the project includes structural repairs, construction of a new ADA accessible restroom at the main entrance and replacement of the cedar shingles along Cherry Street and at the main entryway.

Discussed at the recent Hoquiam City Council meeting, painting/staining of the outside of the stadium will be undertaken. The plan is to have the stadium look closer to historic standards.

After a review by the Historic Preservation Commission, the city said that the history of Olympic Stadium showed that the original facility was natural wood, later painted green, and then changed to the current gray exterior.

At the May 23rd City Council meeting, the Council approved a recommendation by the City‘s Historic Preservation Commission that would change the exterior colors from crimson and grey to a stain more closely resembling natural cedar which would have been the colors when the facility was original constructed in the 1930‘s.

The conversation at the meeting was mixed, with some councilmembers wishing the stadium be painted to Hoquiam High School colors. The council was reminded that the stadium is owned by the city, not the school district, and is home to numerous local sports organizations including HHS and Grays Harbor College. As a historic reminder, council also recalled when the stadium had seen paint to reflect it as being home to the Grays Harbor Gulls organization.

As part of future planning, the Mayor and City Council will hold a workshop on June 13th from 6:30–7:00 pm, prior to the 7 pm Council meeting, in the City Council chambers to revisit the recommended stain color on Olympic Stadium and will discuss opportunities to fund replacement of additional siding along the west and north ends of the stadium.

Citizens who would like to provide feedback on the color scheme for Olympic Stadium are urged to contact your city council member or City Administrator Brian Shay by e–mail at bshay@cityofhoquiam.com no later than June 7th at 5 pm.

The current project at Olympic Stadium is funded through a $900,000 Washington State Community Development Block Grant, $30,000 from the Grays Harbor Community Foundation and $20,000 from Grays Harbor County Tourism. The cost estimate to replace the additional siding on the west and north ends of the stadium totals $735,000. Any individuals, businesses or groups who would like to make a financial contribution to this community project are encouraged to contact City Administrator Brian Shay.

For more information about the history of Olympic Stadium, please visit our website at https://cityofhoquiam.com/olympic–stadium