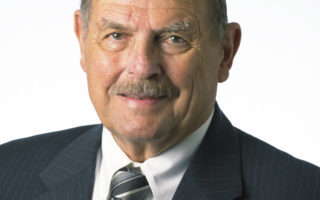 The Port of Grays Harbor has confirmed that Commissioner Jack Thompson has died after suffering a head injury after falling on September 30 while in Santiago, Chile.

The Port tells KXRO that Thompson had been hospitalized since the fall and passed early this morning.

Thompson had been in the country with his wife, Trish, for the American Association of Port Authorities 107th Annual Convention.

“The sudden and devastating passing of Commissioner Thompson is a tremendous loss that will be felt throughout the Port community and beyond.  On behalf of our entire Port family, we extend our deepest condolences to Commissioner Thompson’s family during this difficult time.  Jack’s leadership, wisdom and service to his community will be deeply missed and never forgotten.  His legacy of economic development and job creation will live on throughout our community and the port industry,” shared Executive Director Gary Nelson.  “We would also like to thank the staff of AAPA, the Port of Valparaiso, the U.S. Embassy and U.S. Department of Commerce for providing support and resources during this difficult time,” said Nelson.

Thompson joined the Port Commission in 1994 and was  serving his 5th term representing District 2 as the third longest serving Commissioner in Port of Grays Harbor history.

In a statement, the Port said;

“A successful businessman in his own right, Commissioner Thompson was instrumental in the diversification and development of the Port over the past 25 years. His accomplishments include expanding the Port’s portfolio of cargoes to include dry bulk, liquid bulk, RORO, and OHOW in addition to the traditional wood-based commodities such as logs, lumber, pulp and paper that built the infrastructure that provides the platform for job creation at the Port today.  Commissioner Thompson also led efforts to attract employment opportunities to the area through manufacturing and seafood processing and was a staunch supporter of longtime tenants that provided the foundation for the growth during his tenure on the Port Commission.  An advocate for economic development, Commissioner Thompson worked with other leaders to ensure the assets of Satsop Business Park provided economic opportunities for the citizens of Grays Harbor.”

“I’m saddened to learn of Jack Thompson’s passing. My family and I send our prayers and deepest condolences to Trish and all of Jack’s family members. In more than three decades of public service, Jack fought to bring great jobs here. He built relationships with people and businesses around the world that led to more cargo and businesses using the port.  I will always be grateful for his partnership in the efforts to create more economic opportunities for folks in Grays Harbor County.”

The Port will begin developing procedures and a schedule to fill the vacant position, and the two remaining Port Commissioners will appoint a new Commissioner from District 2 within 90 days.