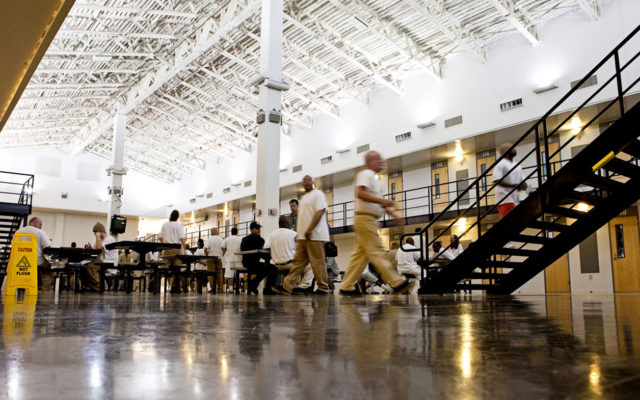 Stafford Creek Corrections Center is the site of a new pilot program that will identify incarcerated individuals with traumatic brain injuries, thanks to a federal grant.

A traumatic brain injury, or TBI, is the brain damage caused by extreme physical force. TBIs can happen after events like fights, car accidents, falls and gunshot wounds to the head.

According to the Department of Corrections, they received a multi-year grant from the National Institute on Disability, Independent Living and Rehabilitation Research (NIDILRR).

This grant, totaling $150,000 per year over five years, will pay for a psychological associate to conduct TBI screening among incarcerated individuals at the facility starting in the spring of 2020.

“As TBIs become more of a public discussion, it’s important to acknowledge some of our incarcerated population have had TBIs that have resulted in some degree of functional impairments,” said Risa Klemme, ADA compliance manager for the Department of Corrections. “Our goal is to start a process to identify those persons and provide appropriate resources, accommodations and training to manage these issues.”

From the Department of Corrections;

Marlena M. Wald, an epidemiologist for the National Center for Injury Control and Prevention Center, wrote in a report that incarcerated individuals are more likely to have previously experienced TBI compared to the general public. In fact, Wald estimates between 25% and 85% of people living in prisons and jails may have a TBI.

The causes of TBIs among the incarcerated population can vary greatly. Wald’s report mentioned repeat exposure to violence, such as gang initiations, can cause TBIs among incarcerated individuals. Incarcerated females surveyed in the report often indicated they had injuries from domestic violence situations before entering the correctional system. Other reports, like those from the Centers for Disease Control, suggest TBIs can be caused by risky behaviors spurred by a history of drug or alcohol abuse.

The effects of TBIs can make it more difficult for incarcerated individuals to comply with prison expectations, according to Klemme. An incarcerated person with a TBI may not understand questions or be slow to respond to staff requests. They might not remember instructions or have trouble keeping their cells tidy. Lights and sounds may cause a person to become agitated. Impaired cognitive abilities may make it hard to control anger and impulse behavior. Furthermore, the effects of a TBI could be mistaken for behaviors associated with cognitive disabilities or mental health disorders.

Any one of these situations could be mistaken for deliberate defiance on the part of the inmate.

That’s why the DOC is taking extra steps to ensure correctional staff recognize signs of TBIs and are trained to interact with TBI-impacted individuals safely.

The Washington Department of Corrections is one of the first state correctional agencies in the U.S. to implement a system-level response to TBIs among the incarcerated population.

Part of the grant allowed the University of Washington, Disability Rights Washington and Washington Corrections to create an introductory training video on TBIs as part of the agency’s annual in-service training for all staff agency-wide. All the department’s ADA coordinators, psychologists and Skill Building Unit staff received additional intensive training about TBIs.

Additionally, department staff who would work with incarcerated individuals with TBIs presented and received training at state-led TBI conferences, National ADA symposiums, and at the National Academic Policy Conference on Correctional Health. The DOC is also part of a group of professionals who are working to develop a set of national correctional practices standards for incarcerated individuals with TBIs.

Besides training staff on TBIs, the grant will allow the prison to offer classes and peer support groups to incarcerated individuals. The classes will teach those with TBI strategies to improve memory and thinking, cope with sensory sensitivities and manage emotions and behaviors. Stafford Creek will also host peer support groups for incarcerated individuals led by volunteers who are TBI survivors.

Upon release, the Washington Corrections has reentry navigators who will connect incarcerated individuals with TBIs or other cognitive disabilities to Department of Social and Health Services’ Developmental Disabilities Administration and local agencies to help them continue self-care after leaving prison.

“The long-term goal is to improve outcomes for incarcerated people who have a TBI within and outside of prison,” said Dr. Mark Harniss, Director of the Center for Technology Services and Disability Studies at UW. Harniss is also the principal investigator of the department’s NIDILRR grant. “We hope to see incarcerated individuals with TBIs spending more time in lower security settings, receiving fewer infractions, participating in educational and vocational programs and exiting DOC able to participate in community life without recidivism.”

The Department of Corrections is also applying for another grant in hopes to launch a second TBI screening site at the Washington Corrections Center for Women in Gig Harbor. The Department will find out if it receives that grant by summer 2020.

Corrections is also taking steps to help staff who think they might have a TBI themselves. It’s not uncommon for correctional employees to have prior experience in other fields of law enforcement or the military. People working in those careers can have a higher risk of having TBIs.

Klemme has been working with an occupational therapist to develop educational materials for staff with resources and guidance on managing TBIs.

Klemme adds the pilot program is one example of the work supporting the Department’s mission of improving public safety by positively changing lives.

“We are committed to providing the best possible care to our incarcerated individuals and are excited to be a leader in developing national standards of training models related to TBI and correctional systems,” Klemme said. “If we can help these individuals better cope with the effects of TBI it will lead to a safer environment for staff and better outcomes upon release to the community.”