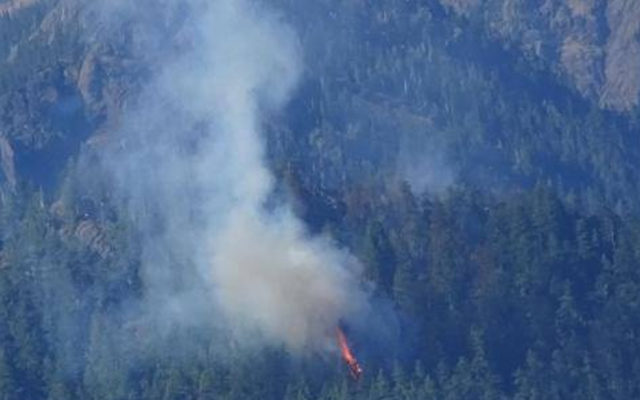 OLYMPIA – As wildfires rage across the entire west coast, a giant wave of smoke has blown across Western Washington, creating worsening air quality that will likely linger through today.

One of the fires that has contributed to the smoky air is the Mount Lena Fire in the Olympic National Park.

In the latest update, Washington State Parks says that the lightning-caused Mt. Lena Fire that started on August 16 continues to burn in the southeast portion of the Olympic National Forest in the Hamma Hamma area.

That fire has grown to an estimated 20 acres after the area received a pattern of hot, dry, unstable conditions over the last several days.

A confinement strategy is being implemented to keep the fire north of the Hamma Hamma Road and west of Cabin Creek.

For public safety, Olympic National Forest has implemented a fire closure of the Lena Lake trail system due to its proximity to the fire.

The closure prohibits public access to trails that lead to both Upper and Lower Lena lakes, as well as the southern portion of The Brothers Wilderness. All visitor use past the Lena Lake trailhead at the junction of Forest Road 25 is prohibited. The trail and area closure will be in place until the fire no longer poses a threat to the area.

Heavy smoke on the Olympic Peninsula from unprecedented wildfires in Eastern Washington and Oregon is expected to linger in the coming days. Detailed information about air quality and wildfire smoke impacts on health as well as smoke modeling tools and guidelines for considering whether to modify activity can be found online at www.wasmoke.blogspot.com.

Smoke from the Mt. Lena fire may be visible at times.

Due to the steep, hazardous, and inaccessible terrain, this will be a long duration fire that will continue to burn until a season-ending weather event in the fall.

Updated fire information for the Mt. Lena Fire can be found at https://inciweb.nwcg.gov/incident/7184/