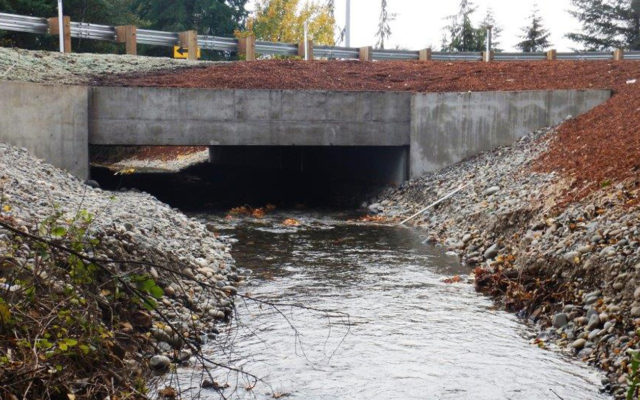 Nearly 20 fish passage projects in Grays Harbor are currently out to bid, as part of a larger Olympic Peninsula project.

The Washington State Department of Transportation announced that a multi-year fish passage project includes 29-identified streams and culverts that cross under US 101 and State Route 109 in Grays Harbor, Jefferson and Clallam Counties that are in need of improvement.

In Grays Harbor, this includes 19 projects, with the remainder of the projects on the northern side of the peninsula.

This work may include installing new underground structures or adding bridges to the areas to comply with the 2013 federal court injunction that required the state to significantly increase the state’s efforts in removing state-owned culverts that block habitat for salmon, bull trout and steelhead.

The Washington State Department of Fish & Wildlife say that the Grays Harbor watershed has 608 known human-made barriers. This number may not represent a complete inventory of fish passage barriers and inventory work is ongoing.

The end result will simulate what is found in a natural stream bed for salmon and resident fish.

According to the project data, these culverts currently do not allow fish to cross underneath the highways to access habitat.

WSDOT will work to identify efficiencies and delivery methods that will accomplish the overall project objectives with the least amount of impacts to travelers.

WSDOT and the Design-Build contractor will consult with local stakeholders on potential detour routes and the length of highway closures for vehicles, bicyclists and pedestrians.

Once complete, this project will restore nearly 37 miles of potential habitat across the Olympic Peninsula.

When a contractor is selected, the overall work may be bundled to include multiple fish barriers each year in order to meet the project deadline of fall 2026.

Any highway closures will be announced in advance.