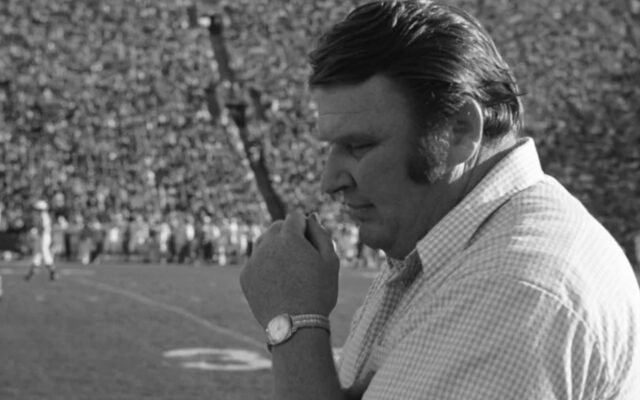 The NFL issued the release, saying Madden died on Tuesday morning, although the cause of his death has not been released.

“On behalf of the entire NFL family, we extend our condolences to Virginia, Mike, Joe and their families,” NFL Commissioner Roger Goodell said in a statement. “We all know him as the Hall of Fame coach of the Oakland Raiders and broadcaster who worked for every major network, but more than anything, he was a devoted husband, father and grandfather.

“Nobody loved football more than Coach. He was football. He was an incredible sounding board to me and so many others. There will never be another John Madden, and we will forever be indebted to him for all he did to make football and the NFL what it is today.”

During his college career, Madden played football for the Grays Harbor College in 1956 before transferring to Cal Poly, where he eventually graduated with a Bachelor of Science in Education and a Master of Arts in Education in 1961.

Madden was drafted by the NFL’s Philadelphia Eagles in 1958, according to his profile on the Pro Football Hall of Fame website, a knee injury in his rookie season ended his playing career.

His coaching career began in 1967 with the Oakland Raiders as Linebackers Coach before becoming head coach at the age of 32.

While coaching the Raiders for a decade, Madden brought a 103-32-7 regular-season record and a Super Bowl win in 1976.

After he ended his coaching career at the age of 42, Madden went on to be a prolific broadcaster for three decades and the name behind the “Madden NFL Football” series of video games.