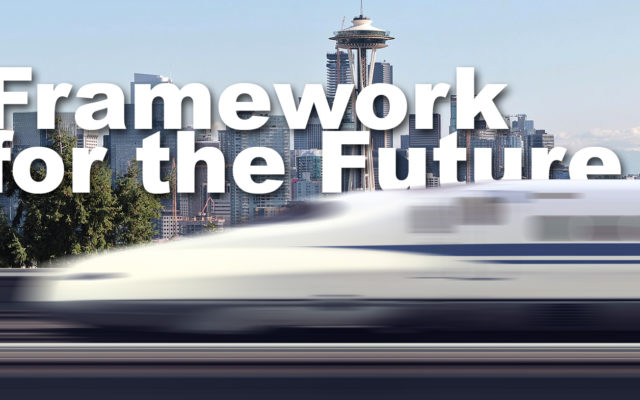 A new report has been released that details plans to bring ultra-high-speed ground transportation to the Pacific Northwest.

The report, the 2020 Framework for the Future, sets forth a roadmap for continued work in a post-COVID-19 future for statewide transportation.

The report builds on previous studies conducted over the past three years and details next steps on governance, strategic outreach and funding and financing. It was released Tuesday, Dec. 8, and submitted to the executive and legislative branches of Washington, Oregon, and British Columbia.

Offering travel time of less than an hour between each major city – at speeds of up to 250 mph (402 km/hour) and 20 to 30 trips per day – the new system would link the metropolitan areas of Portland, Seattle and Vancouver, British Columbia while also offering connections to stations in between and beyond.

The 2020 report focuses on three areas crucial to future decision making. It offers direction on creating a coordinating entity to advance the project beyond the initial concept phase and outlines a more formal governing model for the future. It also emphasizes the importance of robust engagement with communities, elected officials, state and national officials, business and labor leaders and advocacy organizations. Finally, it sets forth several funding and financing scenarios that include possible federal, state and private investments.

Earlier studies estimated that the ultra-high-speed system could generate $355 billion in economic growth and more than 200,000 family-wage jobs. Construction costs were estimated to be between $24 and $42 billion and revenues are expected to cover project costs by 2055. (All dollar figures are US currency). Using high-speed rail, magnetic levitation or hyperloop technology, the system would be stand-alone, rather than sharing or relying on existing infrastructure. It would include some elevated tracks and tunnels, with no at-grade crossings with roads. The exact route and type of technology has not been determined and requires more analysis.

“We are living in unprecedented times that call on us to envision our future in new ways. Transformative infrastructure projects like this one could help us rebuild our economy in the short term and provide us with a strong competitive advantage in the future,” Washington Gov. Jay Inslee said. “Imagine fast, frequent and reliable travel with the potential for zero emissions and the opportunity to better compete in a global economy. It could transform the Pacific Northwest.”

“This study is another important step toward better, faster ways for people to get where they need to go throughout the Pacific Northwest,” said British Columbia Premier John Horgan. “Improving connections through ultra-high-speed rail is good news for people on both sides of the border as B.C. moves forward with Washington and Oregon on a path to building a stronger post-COVID19 regional economy that works for everyone.”

“Bringing high-speed rail to the Pacific Northwest would bolster our economies, while contributing to our efforts to combat climate change,” said Oregon Gov. Kate Brown. “This study affirms that a regional high-speed rail system would yield an equitable and modern transportation infrastructure that benefits people, the environment, and the economy. This type of bold investment would help position our region for the future.”

“High-speed rail will shrink travel times throughout the Cascadia Corridor, providing a strong transportation core for our region,” said Microsoft President Brad Smith. “This report provides a valuable roadmap for making this international project a reality.”

The study was completed by consultant WSP USA along with IMG Rebel and EnviroIssues.