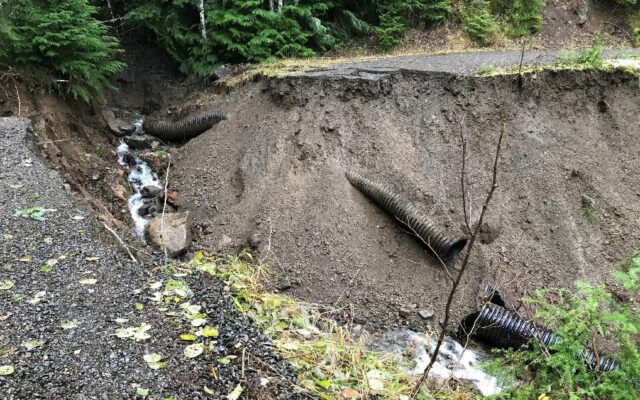 A Forest Service Road in the Olympic National Forest received funding to repair a portion washed away in extreme weather.

The US Forest Service says that $1.7 million in disaster relief supplemental funding was allocated to restore temporary access along Forest Service Road 29.

That road has been closed due to debris flows and washouts caused by extreme weather events last year. In a release, officials say that between November 12-15, 2021, an atmospheric river event brought heavy rainfall on areas that were already saturated. The runoff from those storms triggered multiple debris flows which impacted Forest Service Roads and caused 10 major road failures.

As a result of this damage, several roads in the northwest portion of the Olympic National Forest have been closed and will remain closed for up to two years until repairs can be made.

“We urge visitors to respect all road closure signs. In some locations remaining asphalt may not be adequate to support vehicular or pedestrian traffic, and some stretches of road have been completely washed out.”

The Forest Service calls the road receiving this funding “a vital emergency route” and these funds will allow for the installation of temporary structures to bring access to portions of the Olympic Peninsula.

“Preliminary work including design and planning is currently occurring by Forest Service staff and partners to prepare sites for pending structure installation and to ensure crucial natural resources such as fisheries are being protected. “

It is projected that project work will start late spring to early summer with an estimate of having the road accessible by late summer if no unforeseen circumstances occur.

Funding through Emergency Relief for Federally Owned Roads (ERFO) and other sources are actively being pursued to fully repair Forest Service Road 29 and other forest roads that were impacted by the high volume of rain experienced last year.

The @olympicforest has received $1.7 million in disaster relief funding to restore temporary access along FS-29 which has been closed since November 2021 due to debris flows and washouts caused by extreme weather events last year. https://t.co/caVJun7HIS
📸: USFS FS-29 Dec 2021 pic.twitter.com/buV2eGDCy1