Montesano to hold workshop for how to spend ARPA funds

The Montesano City Council will be holding a workshop to discuss how best to spend over $1.1 million in American Rescue Plan funding over the coming years.

The workshop has been scheduled on Tuesday, August 24, 2021 at 5:30 p.m in the upstairs meeting room at Montesano City Hall.

In addition to stimulus checks sent to residents and increases in tax credit and other items, the American Rescue Plan provided $350 billion dollars in emergency funding for state, local, territorial, and Tribal governments to remedy losses during the pandemic.

Montesano City Councilmember Ian Cope spoke to KXRO, saying that a concern is exactly what is in allowable use for these funds.

According to the U.S. Treasury, the American Rescue Plan was intended to provide relief to these local governments to support the public health response and lay the foundation for economic recovery.

In addition to helping these governments address the revenue losses they have experienced as a result of the crisis, the funds are intended to help cover costs incurred due responding to the public health emergency and provide support for a recovery – including through assistance to households, small businesses and nonprofits, aid to impacted industries, and support for essential workers.

It also provided resources for state, local, and Tribal governments to invest in infrastructure, including water, sewer, and broadband services.

On Tuesday, the Montesano City Council continued discussion on the funds and numerous options for the city. 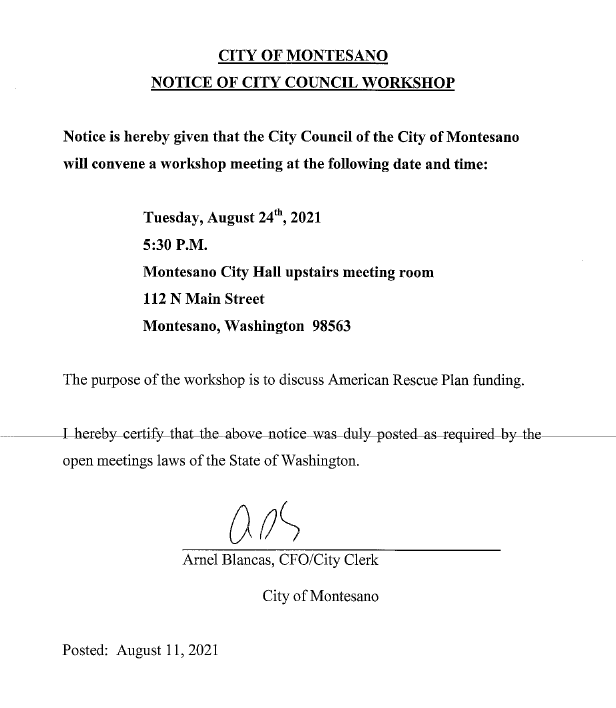