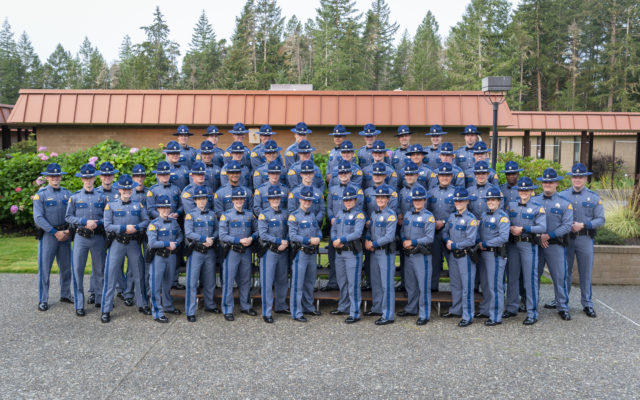 On Wednesday, a ceremony was held at the State Patrol Training Division that saw 49 Washington State  Patrol (WSP) troopers sworn in by Justice Susan Owens of the Washington State Supreme  Court.

Among them was Cody Robinson of Montesano.

Robinson was highlighted in his class, earning the Top Control Tactics Award which recognizes him with the highest level of proficiency in “control tactics techniques, to include self-defense, handcuffing, searching, and use of force thought  process”.

Robinson will be working for the State Patrol in the Monroe area.

The entire class was presented with their commission cards by Assistant Chief Jeff R. Sass after completing over 1,000 hours of training.

The Washington State Patrol Academy produces approximately three  cadet classes each biennium, which accounts for about 100 to 120 new troopers. Historically, only  about four to six percent of the total number of applicants makes the grade to become WSP troopers.

“The 49 cadets graduating today endured a rigorous application process, extensive background  investigation, and received the best training, unmatched anywhere else in the nation. Today, they will  join the ranks of Washington’s finest, as troopers of the Washington State Patrol, a tradition that  began 99 years ago on June 21, 1921, when sixteen brave men kick-started their Indian motorcycles,  strapped on an armband and started a proud tradition known today as the Washington State Patrol,”  said Chief John Batiste.

Also during the ceremony, the Core Values Award was presented to Trooper Samuel T. Harshberger.  This award is presented to the trooper cadet who most typifies the Training Division Core Values,  which includes strong leadership, effective partnerships, professional excellence, acting with integrity  and accountability, respecting and protecting individual rights, and earning the trust and confidence of  the public.

The recipient of this award was determined by an anonymous vote of the cadet’s classmates, and is sponsored by the Washington State Patrol Memorial Foundation. This award  honors the most recent State Patrol employee to give their life in service to the citizens of the state of  Washington.

The award was  presented in Trooper Schaffer’s honor by his wife, Sandra Schaffer.