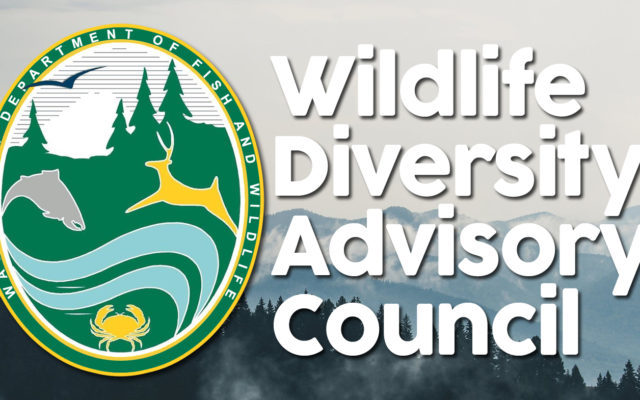 Members are needed on a council that focuses on endangered species and wildlife diversity.

The Washington Department of Fish and Wildlife is asking residents to apply to serve on their Wildlife Diversity Advisory Council.

This group provides management recommendations to the department on endangered, threatened and nongame animals. This ranges from butterflies to killer whales.

Currently, the only local resident listed on the membership roster is Lauren MacFarland of Taholah.

Following applications, WDFW Director Kelly Susewind will appoint members to the advisory council based on their interest in wildlife and their ability to communicate their perspectives to the department and a broader group of stakeholders.

Applications or nominations must be received by June 20.

WDFW says that they especially encourage applications from those who can represent eastern Washington, academia, agricultural and timber industries, hunting and fishing groups, and conservation organizations. Those with experience in communications, social science, and natural resource economics are also encouraged to apply.

Nominees do not have to be affiliated with an organized group to receive consideration. Nominations must be submitted in writing with the following information:

Nominations should be submitted to Taylor Cotten, Acting Wildlife Diversity Division Manager, by email at Taylor.Cotten@dfw.wa.gov or by postal mail at Washington Department of Fish and Wildlife, 600 Capitol Way N, Olympia, WA 98501-1091.

Wildlife advisory council members will serve three-year terms, and should be available for advisory council meetings beginning as early as September. The council holds at least two one-day meetings a year. Sub-committees on specific topics hold conference calls and meetings as needed throughout the year.

Council members, upon request, will be reimbursed by WDFW for travel expenses to attend meetings.