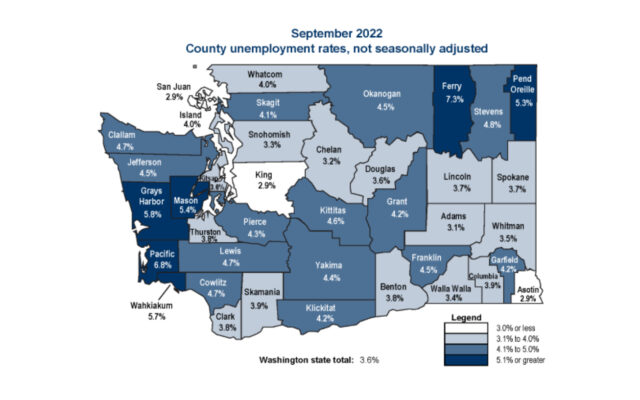 The Grays Harbor unemployment rate dropped nearly an entire percentage point from August to September, but remains in the top three statewide.

In numbers from the Employment Security Department it shows that Grays Harbor dropped to 5.8% unemployment, down from 6.5% in August.

Between August and September, the Grays Harbor labor force grew slightly, while total employment rose by around 300 and the total unemployment dropped by around 200.

With the rate, the county sits at third highest in the state.

Pacific County had the 2nd highest rate within Washington at 6.8%.

The county saw growth in both total employment and unemployment.

Ferry County had the highest rate at 7.3%, a full 1.5% higher than Grays Harbor.

The lowest rate in the state was split between Asotin, King, and San Juan counties at 2.9%.

Statewide, unemployment remained constant from August to September at 3.7%.