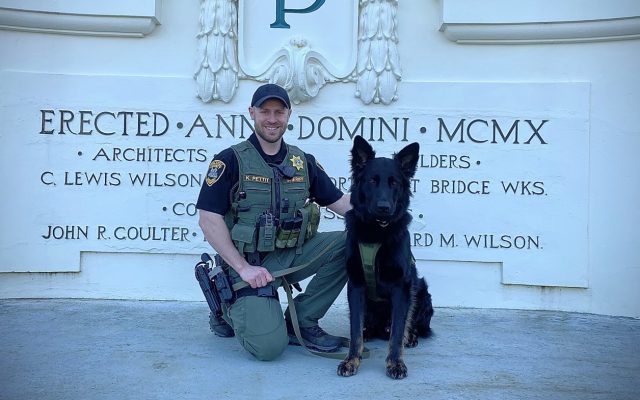 In a release, the the Pacific County Sheriff’s Office has introduced K9 Officer Kova (Kova Vom Blaue Linie) to the public. 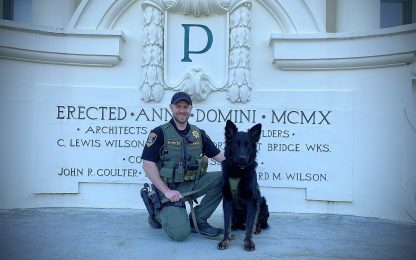 Kova is a 22-month-old Male German Shepard that comes to the agency courtesy of Blue Line K9, in Rochester, WA and is partnered with Deputy Kyle Pettit.

“Blue Line K9 is a small family owned business dedicated to producing quality police dogs. Blue Line K9 graciously donated K9 Kova, at no cost. A donation of a police K9 is extremely rare. High quality police dogs have been difficult to secure for the past couple years and Covid-19 only exacerbated the shortage, adding restrictions on importing canines from abroad. The Sheriff’s Office is very grateful for Blue Line K9’s generosity.”

Kova and Deputy Pettit just completed over 400 hours of training and have been certified through the Washington State Criminal Justice Training Commission as a K9 team for Patrol as of March 11th, 2021.

According to the PCSO, Kova is unique in a number of ways, including that for the first 1.5 years of Kova’s life, he was a family pet.

“Kova comes from a strong bloodline of proven working dogs and as Kova began to mature, his high drive and desire to work became more than his original family could provide. This led him back to Blue Line K9. Deputy Pettit had been in communication with Blue Line K9, and was informed that Kova would be a great candidate.

K9 Sgt. Randy Wiegardt and Deputy Pettit immediately went to Blue Line K9 to evaluate Kova. It was abundantly clear during this visit that Kova had the drive and desire to be a great working K9.

With Kova’s bloodlines and drive, the decision was made to utilize Kova as a “dual purpose” K9, meaning he would be trained and certified in patrol and apprehension first as well as narcotics detection at a later date.”

The Sheriff’s Office says that it’s important to note that patrol K9’s are more than just an “apprehension” tool.

“Patrol K9’s can be utilized to track and locate suspects of a crime, search for lost/endangered individuals or locate property/tools/articles used and discarded during the commission of crime.  Law enforcement K9’s are held to high standards and undergo continuous, rigorous training (16hrs/month +) to maintain efficiency and effectiveness.”

During his first week on Patrol, K9 Kova responded to assist a deputy during a vehicle pursuit. The suspect driver and passenger of the vehicle had already been detained prior to K9 Kova’s arrival. However, K9 Kova conducted a search of the area, where the suspects fled and were hiding. The terrain was steep and covered with dense underbrush. K9 Kova alerted to the presence of an article where one of the subjects had been hiding. The article turned out to be a plastic baggie containing contraband (suspected methamphetamine).

Deputy Pettit stated, “Kova has matured significantly just in the few short months we’ve been partnered together. Even though Kova has “high drive” and strong desire to work, he can also be very relaxed and laid back. For me, Kova has the perfect demeanor. When it’s time to work, he turns it on and when it’s time to relax, he is pretty laid back. That’s extremely rare with working line K9’s. I look forward to Kova’s continued growth and I believe he will be a valued asset to the citizens of Pacific County”

Sheriff Souvenir added, “Our office is extremely pleased to have Deputy Pettit and K9 Kova back from training and back patrolling our county. Adding K9 Kova to our already successful K9 program only benefits our citizens safety and security. We would like to again thank Blue Line K9 for this gracious donation. We would also like to thank everyone who have supported and donated to our K9 program since its inception.”