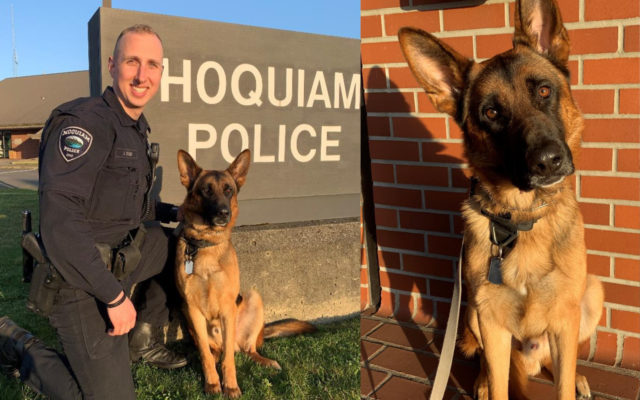 Hoquiam, WA – The Hoquiam Police Department has a new officer.

The new officer is of the four-legged variety as Hoquiam Police say that Niko recently completed his 6-week narcotics canine academy in Shelton.

Niko was certified by the Washington State Criminal Justice Training Commission as a narcotics canine team along with his patrol partner, Officer Jerad Spaur.

Officer Spaur has been a patrol officer with HPD for over five years and started with the department as a police services officer in the City Jail.

Niko came to the department last year as a kennel rescue.

Animal Control Officer Tom Taylor recognized Niko was very attentive and had a great play-drive and Hoquiam Police say most dogs with this sort of play-drive can be trained to detect narcotics.

Officer Spaur and Niko officially worked for the first time on Wednesday by conducting a narcotics sweep in the Hoquiam Jail.

Hoquiam Police Chief Jeff Myers says Niko will also be available to assist their local law enforcement partners as well as the Drug Task Force during the service of drug search warrants.

More information can be found at the Hoquiam Police Department’s Facebook Page.