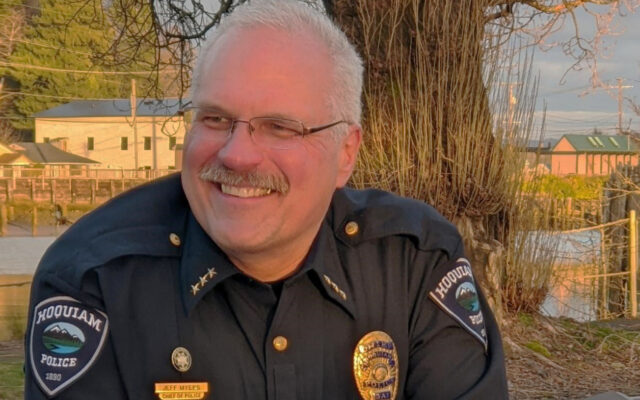 On Monday, Hoquiam Police Chief Jeff Myers announced he is retiring at the end of June.

“It is hard to believe that so many years have passed so quickly as chief of police at the Hoquiam Police Department. It has been an absolute honor and privilege to serve this community alongside the outstanding men and women of this department for the past 16-years.”

In a letter sent to the City Council, Mayor and staff. Myers stated that this has been his plan for a few years.

“Five years ago, I said I had five years left.”

Despite his plan, he stated in the letter that it was still a tough decision to make.

“The decision to retire has been weighing most heavily on my mind and I have lost a great deal of sleep. The members of HPD are my work family (many of the “kids” I have recently hired are actually younger than my own two sons). I want nothing but the best for all my work family.

It will certainly not be easy to say goodbye.”

He said that one of the biggest reasons behind his decision was the opportunity to spend more time with family and his grandchildren.

“It is time to pass the torch and spend more time with our granddaughters.

Among the highlights during his time in law enforcement, Myers cited a number of successes;

“Going forward, I know our department is well set for success. Not only have we hired and retained the best, but we have up-to-date policies and procedures; modern vehicles and equipment; robust ongoing professional training; three-time accreditation by the Washington Association of Sheriffs and Police Chiefs; re-opened the City Jail (which was a goal in the Hometown Hoquiam plan) with a new female cell block; added a grant-funded “behavioral health” navigator to serve Hoquiam, Aberdeen and Cosmopolis; and have now secured a grant to provide MOUD treatment in the City Jail with a second navigator position specializing in “substance use disorder”. Our Crime Watch volunteers and department chaplain are all just plain awesome people.”

According to Myers, at retirement he will have been working “as a peace officer in the Harbor” for almost 34 years, an active member of the Washington Association of Sheriffs and Police Chiefs for 24 years, and has served as a commissioner on the Criminal Justice Training Commission for 13 years, with the last 10 years as chair.

Myers had previously served as an officer for the Oakville Police Department, a Deputy Sheriff for Grays Harbor County, and Deputy Chief for Montesano Police before taking the Police Chief role in 2006 for Hoquiam.

According to a trading card funded by the Washington Transportation Safety Committee when he was still a Lieutenant at the Montesano Police Department, Myers is a 1999 graduate of the Evergreen State College.

“Whether a homicide, domestic dispute, speeding car, barking dog or helping a person who is just having a tough day, I know our department members will handle it.”