Hoquiam felon arrested for having gun, fleeing from police, and drug charges

A felon was arrested in Aberdeen after he resisted arrest at a traffic stop and was in possession of a firearm.

The Aberdeen Police Department reports that a 30-year-old Hoquiam man was taken into custody after he attempted to flee on foot from officers during a traffic stop.

When officers attempted to stop the man near Michigan and Heron Streets Tuesday night, APD says the man began to make furtive movements around the console area of the vehicle before exiting and fleeing.

Officers caught the man a short distance later and he continued to resist arrest, reportedly dropping a revolver to the ground in the process.

The officers used a Taser and handcuffed the suspect. 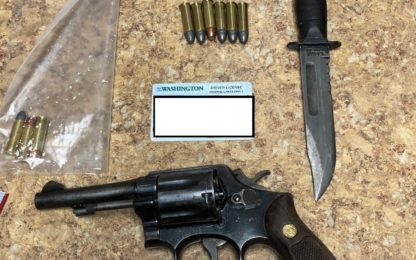 In addition to the loaded gun, the man is said to have had a fixed blade knife on his waistband and he was carrying additional ammunition for the firearm.

As a convicted felon, the Hoquiam man was prohibited from possessing a firearm.

The officers and suspect sustained minor scrapes and abrasions during the incident.

The suspect was booked into the city of Aberdeen Jail.

Booking records show the man facing charges of Obstructing Law Enforcement, Resisting Arrest, Unlawful Possession of a Firearm, Possession of Drug Paraphernalia, Possession of Drugs, and a Violation of the Controlled Substance Act for possible manufacturing or intended delivery of narcotics.