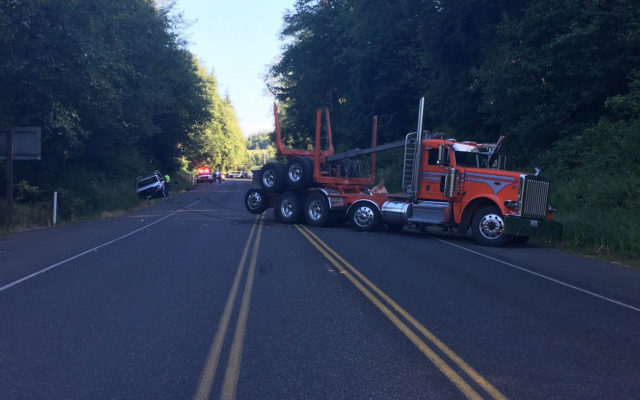 Hoquiam, WA – A head on collision involving a log truck sent a man to the hospital.

The Washington State Patrol tells KXRO that yesterday afternoon at about 4:30 p.m. a 28 year old Humptulips man was heading south on Highway 101 near Ocean Beach Rd in a 2006 Dodge Ram.

The State Patrol says the Dodge crossed the center line and collided head on with a log truck that was driven by a 64 year old Humptulips man.

A 42 year old Hoquiam man who was heading north in a 2019 Ford F150 swerved to miss the Dodge and ended up in the ditch.

The State Patrol says that the 28 year old Humptulips man who was driving the Dodge was taken to Grays Harbor Community Hospital for his injuries.

The Dodge and the log truck were totaled in the collision while the Ford received non-reportable damage.

According to the State Patrol, the highway was partially blocked for about five hours.

#GraysHarbor: This collision involves a semi and two cars, with injury to those involved.

We thank you for your patience as we investigate and tend to those affected by the collision.

Thank you for your patience and for @wsdot assistance with alternating traffic. https://t.co/VNbRhN1qqM pic.twitter.com/mCNtNTtTAw