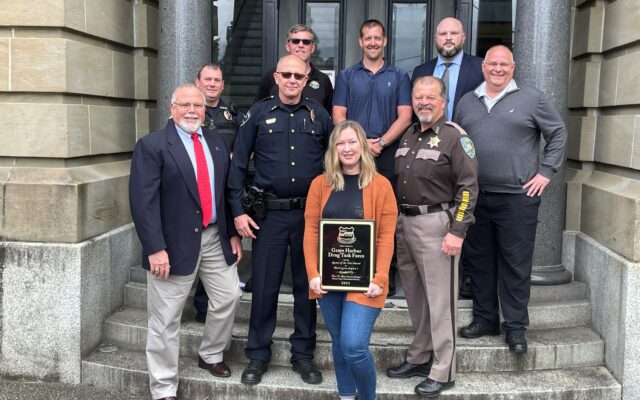 The Grays Harbor Drug Task Force was named as “Agency of the Year” for Western Washington.

WSIN is a national resource center that works with law enforcement agencies.

Schrader stated that the primary goal is to target mid to upper level drug dealers who are poisoning our community with the import of large quantities of illicit narcotics such as methamphetamine, cocaine, heroin, and fentanyl.

According to current Detective Sergeant Darrin King (from Aberdeen PD), who supervises the GHDTF, the GHDTF has been doing great work for many, many years. It is nice to be recognized for all the hard work. The current GHDTF members accept this award not only for the hard work they do themselves but also for the hard work of past task force members through the years.

Det. Sgt. King pointed out the GHDTF relies heavily on tips called in by alert citizens in the community. The task force also receives assistance from Patrol and Investigations from ALL local law enforcement agencies as well as utilizing the formed partnerships with the Drug Enforcement Agency (DEA), and other drug task forces from surrounding counties.

If you have any TIPS for the GHDTF you are asked to call 360-500-4141 and leave your information on our recorded line.