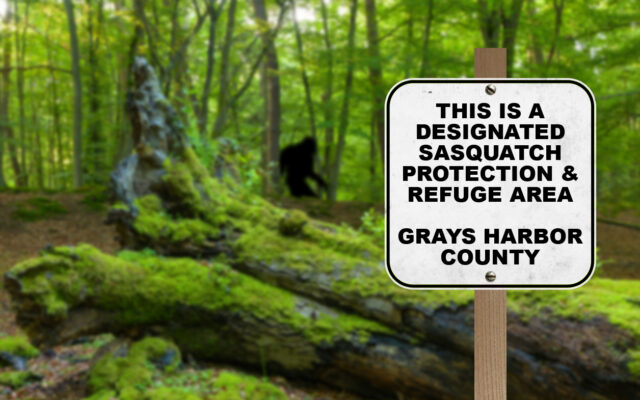 Sasquatch have additional protections within Grays Harbor thanks to local students.

At a recent meeting, the Grays Harbor County Commissioners were presented with a request to protect the elusive Sasquatch population of the region.

The 5th grade students of Miss Andews at Lincoln Elementary in Hoquiam said in their letter that Sasquatch are historically not an aggressive species and should not be treated as such.

“One reason we should have laws protecting Sasquatch is because when sightings have been reported, no attacks or injuries have occurred. In most reports Sasquatch are reported to runaway from people.

Another reason they cited was that these protections allow for continued research that would allow scientists to find out any “benefits of what they do for our world”.

Raines told KXRO that the resolution would ensure just that.

The resolution was passed, with notation that “if Sasquatch exists, it is not flourishing” and adding that  “since Sasquatch is not flourishing, it is likely an endangered species and subject to great harm and extinction if it continues to be unprotected.“

No legal ramification was added to the resolution, only resolving that Grays Harbor residents are asked to recognize and honor the area as a “Sasquatch protection and refuge area”.

While Grays Harbor has a long history with Bigfoot, most notably the contribution of Dennis Hereford who made the “Hereford Casts” of Bigfoot prints within Grays Harbor and available as recasts online, it is not the first time within the state that similar legislation has been passed.

In 1969, Skamania County Commissioners passed an ordinance that originally held a $10,000 fine over anyone who committed a “premeditated, wilful(sic), and wanton slaying” of a Sasquatch/Bigfoot.

In their letter, the Lincoln Elementary students noted the Skamania ordinance as well as a resolution from 1991 in Whatcom County that declared a “Sasquatch protection and refuge area” and stated “if such a creature exists, it is inadequately protected and in danger of death or injury”.

In addition, in 1970, Governor Dan Evans made a (seemingly tongue-in-cheek) proclamation designating “Sasquachii” protected as a Washington State resource and “Official State Monster”. Official designation as the Official Cryptid or Crypto-Animal of Washington has also been proposed.