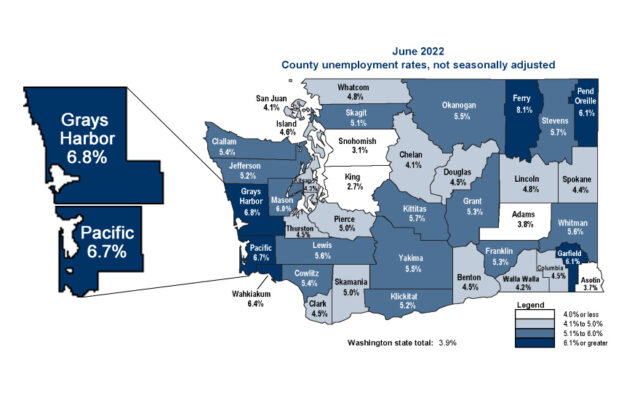 Grays Harbor unemployment rose in June to the second highest figure statewide for the month.

Pacific also saw an increase, and sits at 3rd highest in Washington.

According to the Employment Security Department’s non-seasonally adjusted numbers, June figures show Grays Harbor rising to 6.8%, while Pacific rose to 6.7%.

For Total Employment, Grays Harbor saw a loss of 421 workers in these latest figures, with 51 additional people using unemployment.

In Pacific County, 147 left the Total Employment, with 7 added to the unemployment totals.

Ferry County continues to hold the highest unemployment percentage in the state at 8.1%, although their entire Civilian Work Force sits at 2,361.

That total is 8% of the 28,564 in Grays Harbor and only 28% of the 8,325 in Pacific. That means smaller changes will make much larger impacts on their total percentage.

In May, Grays Harbor and Pacific counties held the 2nd highest statewide numbers, once again behind only Ferry County.