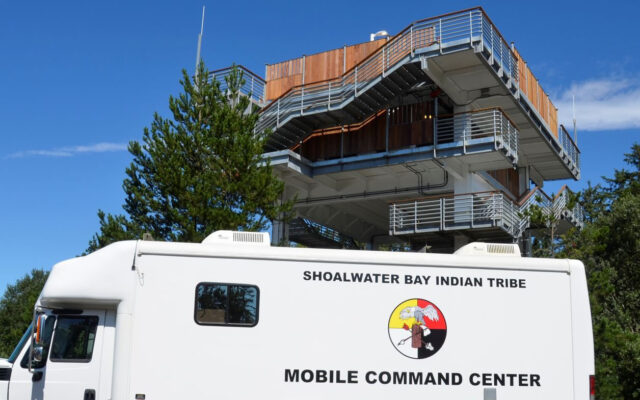 Tokeland has a new tsunami evacuation tower, and it’s the first of its kind.

Washington Emergency Management Division shared that this structure is the first free-standing tsunami vertical evacuation tower in the United States.

Located in Tokeland and built by the Shoalwater Bay Indian Tribe, they used internal funds and a FEMA grant to construct the tower.

Named, “Auntie Lee” in honor of retired Shoalwater Emergency Manager Lee Shipman, Major General Bret Daugherty, Adjunct General for the State of Washington, spoke at the event saying that it was her work that brought the project forward.

Daugherty added that the hope is that the tower is not needed, but is in place for the future of the tribal nation and neighboring communities.

If a big earthquake were to occur, the community would be able to walk to the tower in 15-20 minutes. Tsunami inundation maps show that the first waves of a tsunami could arrive on the coast within 35 minutes.

This is the second vertical evacuation site on the South Beach, following the rooftop tsunami safe area at the Ocosta Elementary School, which was the nation’s first tsunami refuge.

There is continued discussion of adding more towers in the Westport and Ocean Shores areas.