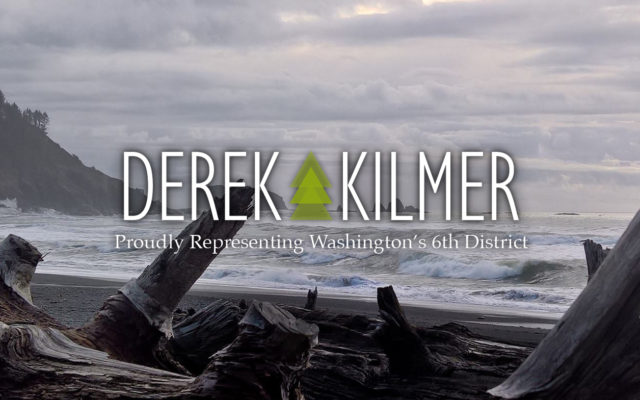 With regard to the funding for the Aberdeen-Hoquiam Flood Protection Project, Kilmer said, “Moving forward with the Aberdeen-Hoquiam Flood Protection Project is a big win for our region – that’s why I’m proud to secure more than $4.9 million in new federal funding to help get it done. This investment means the community can address flooding and avoid future property damage, it will enable more investment in affordable housing and economic development in the region by pulling some of these properties out of the flood plain, and it will help ensure that we won’t see so much money leave the community to pay for flood insurance payments.”

The project also includes the construction of the Fry Creek Pump Station.

“We want to thank Representative Derek Kilmer for his steadfast commitment to protecting the citizens, property, environment, and economy of those in and around the Cities of Aberdeen and Hoquiam from catastrophic flood damage,” stated Aberdeen Mayor Pete Schave. “This funding will immediately go toward of one or more major elements of this comprehensive flood control protection project.”

The project is intended to build resiliency in the face of future flood events, retaining existing businesses, jobs, and residents

“These dollars, along with the Community Project Funding including in last year’s fiscal year 2022 federal budget and other grant funding we are currently pursuing with the Federal Emergency Management Agency, will allow us to move forward with the most critical pieces of this regional flood control protection project in the next few years,” said Hoquiam Mayor Ben Winkelman. “From the beginning, Rep. Derek Kilmer recognized the necessary role the federal government must play for this comprehensive project to become reality, and this is yet another major step in fulfilling that vision.”

In early 2022, President Biden signed into law a 12-bill legislative package that included $9,950,000 in federal funding, championed by Rep. Kilmer, for the project.

With regard to the funding for the Early Childhood and Family Support in Grays Harbor County Project, Kilmer said, “As we work to recover from the COVID-19 pandemic, we’ve got to ensure that families across our region have the resources they need to help their children succeed. That’s why I’m thrilled to secure more than $1 million to assist critical programming in Grays Harbor County that will help folks in need with nutrition assistance, early childhood education, and community and parent engagement.”

Save the Children partners with rural communities to make school readiness programs and parent education opportunities accessible for all. Working in rural, under-resourced communities, their early learning programs aim to help children enter kindergarten ready to learn, putting them on track to thrive as learners and in life.

Save the Children’s service area in Washington’s Sixth Congressional District includes the villages and towns that are within the Quinault Reservation and neighboring tribes such as the Hoh Tribe in Grays Harbor and Jefferson Counties. Through new community project funding, Save the Children is seeking to scale proven programs focused on improving early childhood development and learning outcomes, as well as provide nutrition support for families through the distribution of healthy meals.

Specifically, this request will support the operating costs of the Save the Children Early Steps to School Success (ESSS) program, which has been delivered in partnership with the Lake Quinault School District for over a decade.

Save the Children will also partner with tribal leaders and community facilitators to enhance the Positive Indian Parenting (PIP) framework, a parenting curriculum developed by the National Indian Child Welfare Association, by increasing the number of trained facilitators and opportunities for their regular collaboration and reflection, inviting quality guest speakers, and offering project-based hands-on learning (e.g., making cradleboards, storytelling kits, and traditional rattles).

In addition, the community project funding request will support a subgrant to The Moore Wright Group (TMWG) to implement expanded food security programming.

Through Save the Children’s partnership with TMWG, an approved partner through the Office of the Superintendent of Public Instruction, a program has been implemented to deliver meals to children, and distribute food and needed non-food items across 21 Washington counties.

The project was supported by the Lake Quinault School District and Kendall Peterson, the Quinault Indian Nation Head Start Director.

With regard to the funding for the Westport Marina Modernization Project, Kilmer said, “Our coastal fisheries and seafood industry are an essential part of our local economy. That’s why I’m committed to ensuring that our ports and our fishermen have the resources they need to remain competitive in the Pacific Northwest. This is about jobs, and I’m thrilled to secure $750,000 to help modernize the Westport Marina and support local economic opportunity.”

A port of national significance, the Westport Marina is Washington State’s largest commercial seafood landing port accounting for more than $50.6 million in seafood, ranking it 12th by volume and 15th by the value of catch in the United States. The economic hub of tribal, commercial, charter, and recreational fishing on Washington’s Coast, the activities at the Westport Marina and its uplands support nearly 2,300 jobs in rural Southwest Washington.

“We are so grateful for Congressman Kilmer’s work in securing this funding for the Westport Marina Modernization Project,” said Port of Grays Harbor Commission President Tom Quigg. “Community Project Funding at this critical early stage supports the important work of designing a facility to serve our commercial and recreational users for generations. As one of the top seafood landing ports in the United States, the Port is very proud of the role the Westport Marina plays in supporting thousands of jobs in coastal southwest Washington. Rebuilding and reconfiguration of the Marina’s float infrastructure will require multiple phases and many years to complete, and federal partnership such as this is crucial for a rural community to successfully provide infrastructure of such national significance.”

In addition to supporting commercial boat owners, independent fishermen, and tourism, the Westport marina, and its uplands are home to an array of processors and cold storage facilities that seasonally employ thousands. The combined activities of the Westport Marina generate more than $227 million annually in business revenues.

The Community Project Funding will help fund the design and engineering phases of the modernization project, which will replace the aging float infrastructure at the Westport Marina and ensure that it will be able to serve the needs of its broad base of users for another 40-50 years into the future.

Rep. Kilmer led the effort to secure funding for the project through the House Appropriations Committee’s Community Project Funding process. The project was supported by the City of Westport, the Quinault Indian Nation, local fishermen, and local seafood processors.

A detailed summary of the Consolidated Appropriations Act is available HERE.