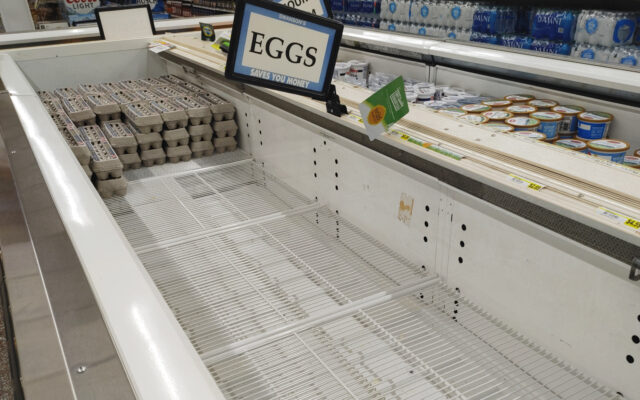 The price of eggs has been increasing over the past year, and shortages are being noted nationwide.

The reason for the shortage and the increased costs are being cited as the result of the ongoing bird flu outbreak, combined with soaring feed, fuel and labor costs.

These issues have led to U.S. egg prices more than doubling over the past year, and it has brought a lot of sticker shock on grocery aisles.

According to the latest government data, the national average price for a dozen eggs hit $3.59 in November, up from $1.72 a year earlier.

The increased cost is putting strain on restaurants, bakeries and other food producers that rely heavily on eggs, as well as bringing concerns for local residents as the price and demand continue to rise within stores.

Inventory at local grocery stores continues to be an issue for families who have had to turn to replacement proteins or searching for local farmers with available supply.

Officials report that many retailers are still looking to replenish their supplies to normal operating levels following the busy holiday season.

Local prices vary on brand, quantity, and variety of eggs.

The USDA, in their latest Egg Markets Overview, stated that we may be seeing a decline in the cost, as wholesale prices for cartoned shell eggs continue to move lower.

The Associated Press found that grocery prices that were up 12% in November are driving inflation higher, even though the overall pace of price increases slowed a bit through the fall as gas prices eased.

But egg prices are up significantly more than other foods because egg farmers were hit harder by the bird flu.

More than 43 million of the 58 million birds slaughtered over the past year to control the virus have been egg-laying chickens, including some farms with more than a million birds apiece in major egg-producing states like Iowa.

Within Washington, avian influenza was first detected in a small backyard flock within Pacific County in May 2022, while a total of 40 domestic flocks have been impacted throughout the state, and 94 wild bird cases.

Nationwide, the Department of Agriculture shows that as of January 6, 2023 there have been 721 confirmed infected flocks in 47 states. That includes 307 within commercial flocks.

Purdue University agricultural economist Jayson Lusk said he believes the bird flu outbreak is the biggest driver in the price increases. Unlike past years, the virus lingered throughout the summer and made a resurgence last fall infecting egg and poultry farms.

Despite this, the supply of eggs at local stores has residents having to pay the increased cost, as even with the cost increases, eggs remain relatively cheap compared to the price of other proteins like chicken or beef, according to the Bureau of Labor Statistics.