Catalytic converter theft leads to arrests and recovery of part

The Hoquiam Police Department made an arrest following a catalytic converter theft.

In a report by Hoquiam Police Chief Jeff Myers, the investigation began after a resident parked his diesel pick-up and boat trailer at a Hoquiam boat launch on August 7 and returned to find that his catalytic converter and a large section of the exhaust system had been cut out from under his truck in the parking lot.

When the man took the truck to the local dealership, the repair estimate was over $7,700.

The following day when Hoquiam detectives reviewed surveillance video of the area they saw two subjects who appeared to be casing the area, and noticed that when vehicles would pull into stalls a man would get out of a vehicle and slide under while a woman would stand outside to walk the area.

When the man came out from under the truck, he was holding a long section of the exhaust system and the catalytic converter and the woman helped load it into their car.

Hoquiam detectives were able to identify both suspects from the video, tracking them to a home in Aberdeen.

As law enforcement watched the home, they saw a number of suspects over a few days, and on at least one occasion, detectives saw there was a pile of exhaust pieces stacked in the driveway, only to be gone the next day.

On August 19th, detectives from Hoquiam PD, Aberdeen PD and the Grays Harbor County Sheriff’s Office served the search warrant on the home and arrested both suspects.

Numerous cutting tools and various vehicle exhaust parts were seized from within the residence and vehicles. 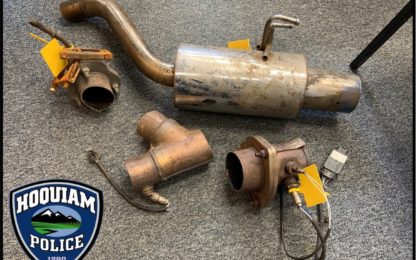 One part that was found featured a sensor and exhaust control valve consistent with a newer diesel pick-up, and the part matched to the truck damaged on August 7.

Detectives from all three agencies have spent the days since the search warrant collecting open cases and information which could be related to the current investigation.  Additional search warrants are likely.

“If not already done, it is important for citizens to report any catalytic converter thefts (or attempts where damage was done) to their local law enforcement agency.

As the sheriff’s office and all police departments in Grays Harbor are on the same police records management system, current reports in the computer allow detectives to connect the dots should any other similar thefts be related to the current investigation.”

Hoquiam detectives seized both suspect vehicles subject to civil forfeiture under RCW Title 10 as they “were intrinsically and directly involved in a felony crime”.

It is believed the stolen catalytic converters were transported out-of-state where they were sold to an individual; detectives are referring the related trafficking in stolen property information to the appropriate law enforcement agency for follow-up.

The investigation is ongoing at this time.

Anyone with additional leads or information can contact Detective Peterson at 360-532-0892 x 276 or Detective Sergeant Mitchell at x 287.