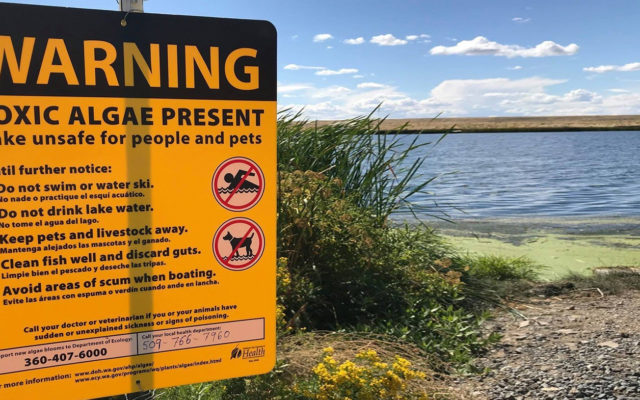 Reports of toxic blue-green algae blooms have begun to surface in parts of Washington, although Western Washington has yet to be impacted.

The Washington State Department of Ecology warns that blue-green algae can appear throughout the year in many Washington lakes and rivers, but it most often develops in summer and early fall when there’s a wealth of warm, calm water and sunlight.

While many blue-green blooms are non-toxic, some produce nerve or liver toxins.

“Blue-green algae is very common, found in every lake in this state,” said Amanda Richardson, watershed implementation lead at the Department of Ecology’s eastern region office. “Certain types of blue-green algae can produce toxins under specific conditions, but those conditions are hard to pinpoint.”

The only way to determine whether toxins exist in the algae is through testing, conducted in Washington at the King County Environmental Lab.

Locally, the Department of Ecology found toxins above state guidelines at Cohassett Lake (listed as Fake Lake) in Westport  in 2008 and Duck Lake in Ocean Shores in 2009, 2011 and 2012.

Toxic blue-green algae is more formally known as cyanobacteria, according to Ecology, as cyan means “blue-green.” It’s a type of bacteria that shares some of the same characteristics of plants and is found in waterbodies across the world.

“As cyanobacteria cells die, toxins are released into surrounding waters. Some toxins, called microcystins, are very stable and can remain in the water for several days after the bloom has disappeared. Microcystin is found most often in the scum floating on top of the water.

While there’s no clear consensus on how to get rid of blue-green algae blooms, dumping vegetation – including grass clippings and uprooted plants – into waterbodies has been known to exacerbate growth. Heaps of vegetation also stop wind and water currents from mixing the water and breaking up algae blooms.”

Last week, the lab tested samples from Moses Lake and found microcystin toxin levels of 26 micrograms per liter, exceeding the Washington state recreational guidelines of six micrograms per liter. The Grant County Health District has since issued warnings that the lake is unsafe for people and pets.

Ecology tells KXRO that county health districts and state agencies rely on the public to report when they see blue-green algae blooms in local waterbodies. If sampling results reveal toxins above the Washington Department of Health’s Recreational Guidance Levels, health districts will post signs at public access areas such as swim beaches and boat launches. They may also notify the public

Local jurisdictions, lake managers and Washington residents can report an algae bloom and sample it to test for potential toxins produced by algae. Visit the Washington State Toxic Algae website to learn how, and to access a database showing recent test results from across the state.

Find more information on blue-green algae at the Washington State Department of Health.

Read on to learn what to look for and what to do if this surfaces at your local waterbody this summer or fall.

Use The Department of Ecology database to locate a lake and find out the most recent testing.  Or find your lake >

Current lakes with values above guidelines