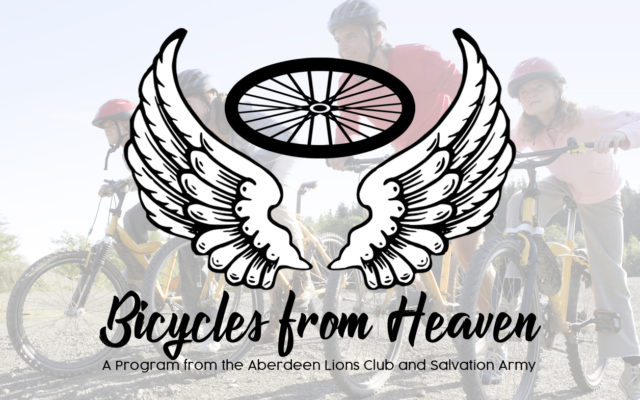 The local “Bicycles from Heaven” program is looking for children who want to receive a free bicycle for Christmas.

The Aberdeen Lions Club “Bicycles from Heaven” program is a cooperative between the Lions Club, Stafford Creek Correctional Facility and the Salvation Army.

The Lions Club collects used and discarded bicycles, pays to have them refurbished to “Like New” condition through repairs and painting by Stafford Creek Correctional Facility workers, and then the bikes are distributed to underprivileged people in Grays Harbor and Pacific County.

The local Salvation Army screens the applications to ensure that they are distributed to those in need.

Gene Schermer and Andy Palmer from the Aberdeen Lions Club spoke with KXRO and said that this year there are about 60 bikes to giveaway to children with the goal of having the applications by December 17, 2022 to begin distribution.

Aberdeen Lions Club representative Gene Shermer told KXRO that the program has been occurring locally for over 20 years.

The local group lists that it was taken over by the Lions from the Aberdeen Kiwanis Club when they disbanded.

Since the Lions ran the event, over 3500 bicycles have been distributed.

Shermer adds that they are always accepting donations of bikes for the program. He says that they are currently looking for larger bikes to refurbish, but all bikes are considered.

Parents can apply by the deadline Dec. 15th by picking up an application at the Salvation Army offices at 120 W. Wishkah in Aberdeen, or printing off the application listed below and dropping it off at the office.