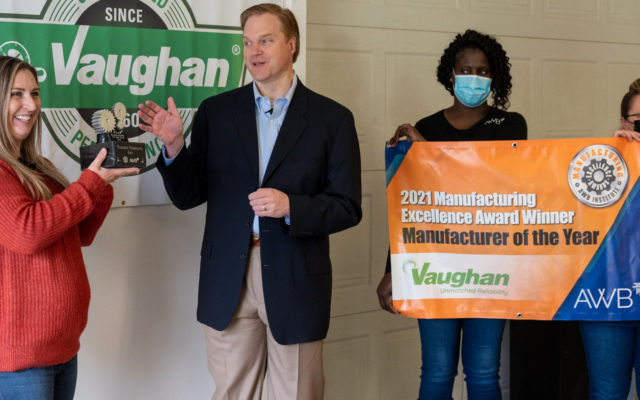 Stacie Vaughan, CFO of Vaughan Industries, accepts the 2021 AWB Manufacturer of the Year award from AWB President Kris Johnson on Oct. 1, 2021, during a visit by the AWB Manufacturing Week bus tour to Vaughan’s Montesano facility. Stacie is part of the fourth generation of her family to run their namesake manufacturer of powerful chopper pumps. She and her brother Jesse Vaughan are two of the 10 descendants of founder Jim Vaughan who are continuing the innovative growth of the company their great-grandfather founded in 1960. Sixty-one years after welder Jim Vaughan founded a company to sell the combination chopper and pump he invented, his great-grandchildren are running a globally successful manufacturing firm in Montesano that employs 120 people and keeps crucial infrastructure running through natural disasters like floods and simple hard everyday use. (Photo: Brian Mittge/AWB).

The Association of Washington Business honored Vaughan Co. of Montesano with their 2021 Manufacturer of the Year Award.

“The Vaughan Co. exemplifies the spirit of innovation and problem-solving that drives Washington manufacturers,” Johnson said. “Someone saw a problem and found a way to solve it. More than 60 years later, the company employs third- and fourth-generation family members and remains the industry leader.”

AWB’s Manufacturer of the Year Award is given to a company that has a commitment to manufacturing excellence, has found creative solutions to challenges, as well as involvement in public policy that impacts manufacturers.

Finalists for the 2021 award included:

The award presentation was among the highlights of the first day of AWB’s fifth-annual Manufacturing Week tour.

The day started at Alaska Airlines in Seattle and continued to Vaughan Co. in Montesano, Heritage Distilling and South Puget Sound Community College in Tumwater, and Capital High School in Olympia.

Vaughan Co. founder Jim Vaughan invented the world’s first “chopper” pump in 1960 to prevent the pumps at local dairy farms from clogging and breaking down. His breakthrough led to dozens of patents and formed the foundation of a company that now employs 115 people and sells products in 92 countries around the world.

“Many of these jobs offer training and career opportunities without a traditional four-year college degree and are popular with those seeking to avoid student loan debt.”

Friday’s tour covered King County, where more than 105,000 people work in manufacturing jobs that pay more than $94,000 a year.