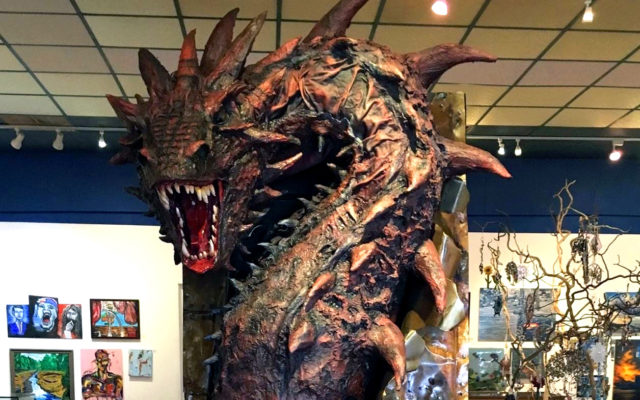 Dragon Door A door with a three-dimensional dragon made from recycled materials is one of a series of doors that will be displayed on the Harbor in the coming months as part of a scholarship fundraiser for Aberdeen High School. It’s currently on display at Mt. Olympus Brewery in Aberdeen. Photo courtesy Harbor Art Guild

Aberdeen High School will be able to award scholarships to a few more students, thanks to some incarcerated individuals and community members.

In a release from the Department of Corrections, they highlighted a project that is taking doors salvaged from closed buildings and condemned properties and lets local artists turn them into pieces of art.

The doors were designed and placed on display locally, with proceeds raised going to the Aberdeen High School scholarship fund for career/technical education for graduating seniors.

Earthwise Architectural Salvage collected and donated the doors for the project, with Harbor Art Guild working with the local artists to create the designs.

The finished doors have been placed on display at the Alder Grove Art Gallery and at participating local businesses through early October. .

Businesses will display the doors and patrons of each business can take pictures of the doors and make donations for the AHS scholarship fund.

At the end of their public showing, businesses have the option to purchase the doors with the donations raised to keep the door on permanent display.

If the business does not purchase their door, members of the general public may purchase them.

Two doors are currently on display.

One is at Mount Olympus Brewing Company, 105 W. Heron St. and the other is at Earthwise Architectural Salvage, 416 Park St.

These doors have been on display since mid-July and are set to stay on display through early October.

The door at Mount Olympus Brewery features a red dragon, made of toilet paper rolls, scrap paper and other recycled materials with blazing yellow eyes that light up.

The door at Earthwise Architectural Salvage is a steampunk, art-deco style piece that features a human face that lights up. Adorned with wooden dials and knobs and painted to look like metal, the door has images, words and dates incorporated throughout the piece related to the history of Aberdeen as well as to the steampunk culture. It even has a functional whistle that can play three tones when hooked to a compressor.

According to DOC, the owner of Mount Olympus Brewery is hoping to raise the money to keep the dragon door on display permanently, with plans to create a beer inspired by the dragon.

An effort to bring light to Aberdeen Debbi Branford Jensen, member of the Harbor Art Guild and chair of the Adoor Project of the PNW, got the idea after a visit from an out-of-town friend, Carrie Moore, who described her first impressions of Aberdeen as “pitch black, tarped buildings with no lights.”

Jensen said she was crying hearing that and wanted to work with a team to beautify the city. She said she hopes that the doors will do that and give an incentive for people to visit local businesses, who have seen a decrease in foot traffic following the governor’s stay-at-home orders related to the COVID-19 pandemic.

Jensen got the idea to approach the correctional facility after attending an art show at the facility last year that featured the work of more than 80 incarcerated individuals.

“I had never been to a correctional facility before and it captured my heart talking to each individual about their medium,” Jensen said. “I was just blown away with the story they made and items they repurposed with such detail. They are so talented.”

Victoria Gamroth, an administrative assistant at Stafford Creek, says having art in correctional facilities can have a profound impact on rehabilitation. It prevents idleness, stimulates creativity and intellect and may raise self-esteem. It also promotes pro-social behavior when incarcerated individuals talk about their work. She says the charitable element teaches incarcerated  individuals about altruism, while allowing outsiders to see correctional facilities in a different light.

“Many of these men came up to me after the art show and said all the positive comments they received from community members has been life changing,” Gamroth said, noting the vast majority of people who go to correctional facilities will eventually complete their sentences and face a stigma when returning to society. “Projects like these bridge the gaps between correctional facilities and the community. It gives people a chance to think outside the box when it comes to incarceration.”

In addition to the two doors incarcerated individuals designed, students from Aberdeen High School had painted 20 additional doors prior to the COVID-19 pandemic as part of their senior graduation project. Those doors will be rotated among displays at the art gallery and local businesses as well, with the option for businesses and the public to purchase them for the fundraiser.

If your business would like to participate in the Adoor Project of the PNW, send an email to Debbi Jensen at [email protected].