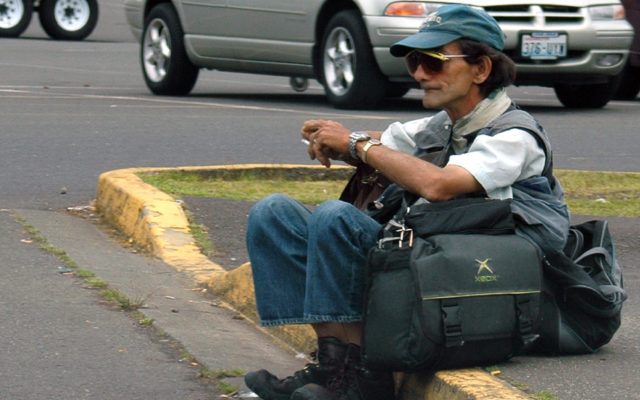 An Aberdeen icon has passed away.

It seems as if everyone had seen Grant Victor Salem at some point.

Known as “The Watchman” to some, Salem was a well known panhandler in Aberdeen for over 20 years.

Salem was found dead in his apartment on March 4, 2011 according to authorities.

Salem was 57 -ears-old and appears to have died from natural causes although an autopsy would determine cause of death.

Authorities are attempting to find family members of Salem. Anyone who might know of Salem’s family links is asked to call 537 6139.

From his memorial page on FindaGrave.com

Legend has it, Victor was dropped off on the streets of Aberdeen, Washington sometime in the mid 1980’s. He could often be seen walking the streets wearing sunglasses and pulling a suitcase along. He would compulsively check his watch thus the nickname The Watchman.

A service was held for him Saturday, March 26, 2011 with dozens of community members in attendance. At the service was a display of his watches, with one set for an alarm to sound at regular intervals.