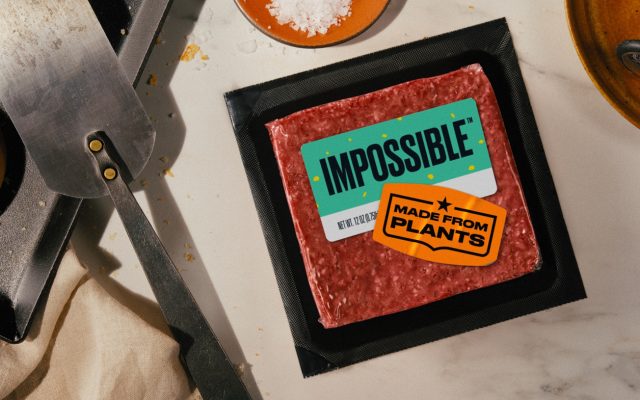 Aberdeen School District will be part of a pilot program to bring the Impossible Burger to students.

Business Wire reports that Impossible Foods announced that it secured Child Nutrition Labels for its Impossible Burger products, which allows them to bring those products to K-12 students in fall 2021.

Impossible Foods is kicking off K-12 pilot programs this month with school districts across the US.

Included in this pilot will be the Aberdeen School District, joined by a limited number of other schools in Palo Alto, CA as well as Deer Creek and Union City Public Schools in Oklahoma.

Schools participating in the pilot will be able to include items for children such as the Impossible™ Street Tacos to, “Impossible™ Frito Pie”, to Spaghetti with Impossible™ Meat Sauce.

“Increasing plant-based menu options is a key part of our strategy to reduce carbon emissions by 34% by 2025,” said Michael Morris, Sr. Manager, Culinary Offer Implementation of Sodexo, one of the nation’s largest food service contractors. “The Impossible Burger is a product we think teenagers are going to get excited about. We are interested in how the popularity of this low-carbon food can help effectively lower a whole district’s carbon footprint, while also getting students more engaged in thinking about their connection to the planet.”

These districts have already served some of these products, surveying students to understand whether offering Impossible products at lunchtime will have a positive effect on school lunch program participation rates next fall.

In Aberdeen, Superintendent Alicia Henderson has already served Impossible Meat Sauce on spaghetti and burgers to middle and high school students as part of the pilot, and said of the response to date, “Early pilot results show a strong response and engagement from both students and teachers. We are excited to be one of the first districts in the country to offer students this product as an alternative to beef.”

In Aberdeen Washington, Superintendent Alicia Henderson served Impossible Meat Sauce on spaghetti and burgers to middle and high school students as part of a pilot, and said of the response to date, “Early pilot results show a strong response and engagement from both students and teachers. We are excited to be one of the first districts in the country to offer students this product as an alternative to beef.”

Interested school districts can email [email protected] to receive more information about adding the Impossible Burger to their district menu.

-From Business Wire and Impossible Foods-

Kids Rule: The power of the next generation

To support the Child Nutrition Label launch, Impossible Foods surveyed 1,200 K-12 aged kids across the U.S. to assess their understanding of the connection between what they eat and climate change. Entitled Kids Rule: What kids know about climate change and why they are key to the fight against it, the results showed the importance to the next generation of the shift to a sustainable food system, and that education is key to driving change.

However, even despite the overwhelming interest in climate change, nearly all kids (97%) still eat meat every week, and only half of kids surveyed reported that “raising animals for meat and dairy” contributed “somewhat to a lot” to climate change.

Once informed, however, on the connection between animal agriculture and climate change, 78% of kids, a significant 16% increase, reported the importance of taking action to reduce the use of cows as a food source to help stop climate change. Additionally, 63% of kids said they were more likely to eat less meat after reading about animal ag’s impact. The report, in its entirety, can be downloaded here.

“Kids provide an enormous and largely unexplored opportunity for environmental progress,” said Jessica Appelgren, Vice President of Communications at Impossible Foods. “They care about climate change and they want to do something about it, and data shows that they have a significant influence over family meal decisions. Our CN Label launch is just the beginning of Impossible Foods engaging this next crucial generation.”

Sustainable and equitable for all

Already considered a leading environmental startup, Impossible Foods’ mission is to help solve the planet’s climate and extinction crises. The company is helping to turn back the clock on global warming and restore biodiversity by making the global food system sustainable.

On the road towards a truly sustainable food system, the company continues to work towards a more equitable food system as well – with a focus on increasing access to nutritious proteins in youth communities specifically, through the school system and beyond. Last year, Impossible Foods launched Impossible™: The Cookbook with proceeds benefiting No Kid Hungry. The company also teamed up with youth-led Intersectional Environmentalist to feed LA communities in need, and drive awareness around the disproportionate effect of food insecurity on BIPOC communities overall.

In March 2021, Impossible Foods and Colin Kaepernick’s Know Your Rights Camp donated over 13,000 Burgers to Compton Unified School District for students and families as a part of a community food distribution event addressing food insecurity and social justice.

Impossible Burger has already started to displace sales of animal-derived foods, whose production is one of the biggest generators of greenhouse gas emissions and the leading driver of the global meltdown in wildlife, and, compared to animal meat, Impossible Burger requires a tiny fraction of the world’s precious resources to produce.