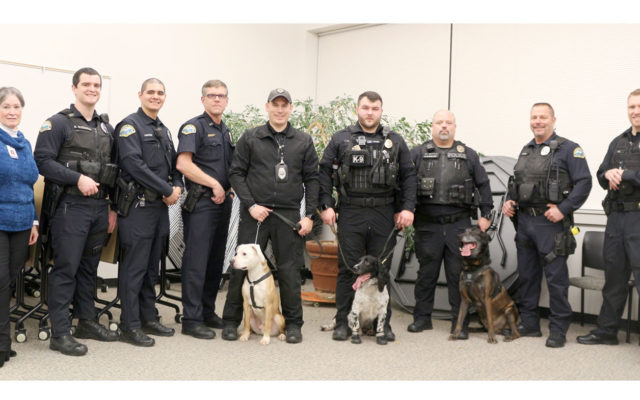 Aberdeen, WA – The Aberdeen School District enlisted the aid of law enforcement for a drug sweep at Aberdeen High School.

The School District tells KXRO that as part of a safe-and-drug-free-schools initiative, they conducted a canine sweep of the halls, locker rooms, and class rooms at Aberdeen High School yesterday.

The district says the canine units alerted on a total of 12 backpacks from lockers and classrooms.

The parents of those students will be contacted to let them know the results of the search.

There were three students found to be in possession of contraband and they will be assessed on a case-by-case basis according to district policy.

He noted that each canine search unit was accompanied by an Aberdeen officer and an administrator for the school district.

Superintendent Dr. Alicia Henderson said “We care about the health and safety of our students. An emphasis on healthy choices should also include enforcement of a drug-free environment.”

She added that the district is very appreciative of the resources and level of support that the local agencies devoted to the effort.

“This activity was carefully planned so that the rights of staff and students were protected, while also demonstrating the district’s strong interest in ensuring a safe, drug-free environment for our students,” said Henderson.

At the start of 2nd Period, Principal Sherri Northington announced over the intercom that the school was in modified lockdown for the purpose of a Safe Schools / Drug Free Schools activity.

She stressed it was not an emergency, that instruction was to continue, and that students were to remain inside their classrooms.

The canine units passed through all hallways and gym locker rooms.

For the classroom searches, students were asked to step into the hallway and leave their backpacks in the classroom.

A canine unit then searched the classroom.

Any backpacks the dog alerted to were bagged and removed to the Community Room to be searched by district staff.

cooperation we received from our students,” Superintendent Henderson said.