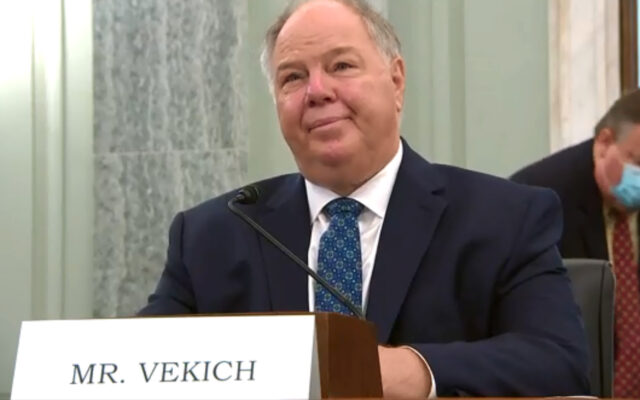 On Wednesday, U.S. Senator Maria Cantwell, Chair of the Commerce, Science, and Transportation Committee, announced that the committee voted to advance the nomination of Aberdeen native and Washington labor leader Max Vekich to be a Commissioner of the Federal Maritime Commission.

The Commission is responsible for regulating agreements between American exporters and the shipping companies that carry their goods to ensure they are fair and competitive.

“Today, we take an important step in confirming Max Vekich, who has been nominated to be a Commissioner of the Federal Maritime Commission. He has decades of experiences on the docks as a longshoreman [and] as a civic leader. His voice, I think will be an important one in addressing supply chain issues at our busiest seaports around the United States,” said Cantwell.

Cantwell spoke in favor of the nomination and of Vekich at the hearing on Wednesday.

Vekich, a native of Aberdeen and a graduate of Grays Harbor College, previously served four consecutive terms as the representative for the 35th Legislative District in Washington state’s House of Representatives from 1983-1991. Vekich served alongside Maria Cantwell from 1987 to 1991.

During his tenure in office he served as Chair of three committees: Agriculture, Trade & Economic Development, and Commerce & Labor.

In 2004, Vekich joined the Port of Seattle to supervise the loading and unloading of vessels. He also served as a member of the International Longshore and Warehouse Union’s executive board. Vekich is married to Marcee Stone, they have three adult children and four grandchildren. Two of his children are longshore workers and his daughter-in-law is currently in training.

President Biden nominated Vekich to serve on the Federal Maritime Commission in July to fill a vacant seat.

Vekich’s nomination must now be approved by the full Senate.

The COVID-19 pandemic has caused unprecedented port congestion and supply chain disruptions. Businesses and Americans are feeling the pinch of rising prices and shortages on everyday products. At this critical time in our country, the Commission plays an important role in oversight, investigations and regulation of detention and demurrage, information flow, and enforcement of unfair practices by foreign shipping companies.

“The perspective and experience that Mr. Vekich will bring to this position of Commissioner is needed in this moment,” Cantwell said at the nomination hearing in October. “He has a unique career first serving as a member of the Washington Legislature, followed by a long career as a longshoreman in Grays Harbor and in Seattle. Mr. Vekich knows port and shipping communities firsthand. He spent his life working in the maritime industry, and knows the challenges faced by the maritime and intermodal transportation system. And I know he understands the importance of what a maritime economy is to the State of Washington’s economy and knows how important it is to our national economy as well.”

“The independent federal agency is responsible for ensuring the ocean and shipping and commerce remain fair and competitive. In light of many issues, COVID challenges, and congestion, I think his nomination is pivotal to making sure that we have the right decision making in place. He is the right person for this job and is supported by both labor and business industry.”