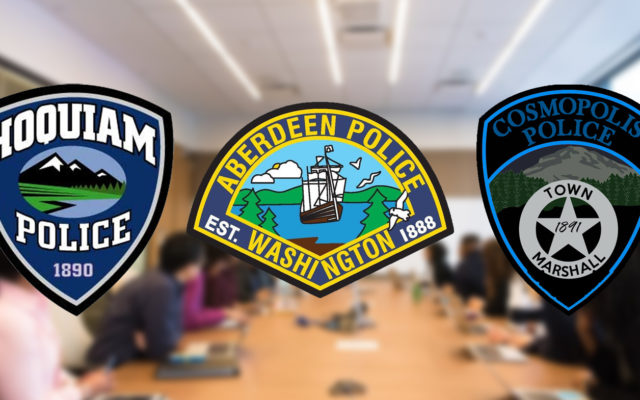 The Aberdeen, Hoquiam, and Cosmopolis Police Departments have signed a letter of consent that brings additional cooperation within the three cities.

In a joint signed press release, the police departments say that they have have “long enjoyed assisting each other with priority police calls and during other times of need”, responding at times when staffing is low, and working on major cases together.

The letter states that since Chief Shumate started at the Aberdeen Police Department, this level of cooperation,collaboration and respect between departments has grown and the police chiefs of the three departments have signed a Letter of Consent to continue that cooperation.

“As the police chiefs of the three cities, we firmly believe strong cooperation between our departments only better serves the citizens of our three cities. We are proud to celebrate this formal step and will continue to look for opportunities for our departments to work together.”

The Revised Code of Washington already allows Washington peace officers to work in areas outside their jurisdiction under certain circumstances, although the Letter of Consent between the local departments also clarifies that an officer of each department can write a ticket or charge an offense into the municipal court of another city when assisting or taking enforcement action in either Aberdeen, Hoquiam or Cosmopolis.

In addition to any other powers vested by law, a general authority Washington peace officer who possesses a certificate of basic law enforcement training or a certificate of equivalency or has been exempted from the requirement therefor by the Washington state criminal justice training commission may enforce the traffic or criminal laws of this state throughout the territorial bounds of this state, under the following enumerated circumstances:
(1) Upon the prior written consent of the sheriff or chief of police in whose primary territorial jurisdiction the exercise of the powers occurs;
(2) In response to an emergency involving an immediate threat to human life or property;
(3) In response to a request for assistance pursuant to a mutual law enforcement assistance agreement with the agency of primary territorial jurisdiction or in response to the request of a peace officer with enforcement authority;
(4) When the officer is transporting a prisoner;
(5) When the officer is executing an arrest warrant or search warrant; or
(6) When the officer is in fresh pursuit, as defined in RCW 10.93.120.