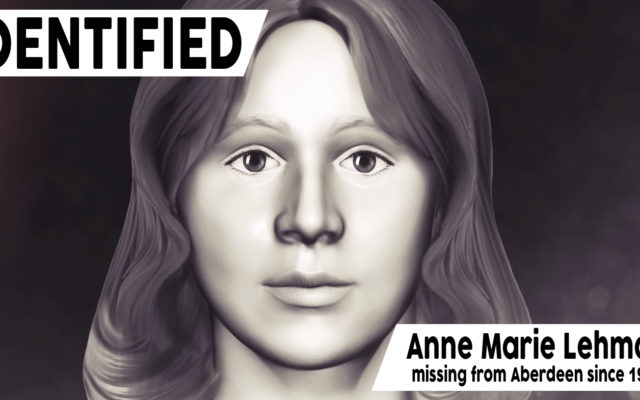 The skeletal remains in a 47 year old cold case in Oregon were identified as a missing teen from Aberdeen.

In February, DNA Doe Project volunteers notified Detective Ken Selig that a potential match was found with a sister of Lehman living in Washington.

As a result, Detective Selig, with the help of the National Center for Missing and Exploited Children, established contact with the sister and obtained a DNA sample from her to confirm the connection.

The Sheriff’s Office said in a release that the family has been notified.

Anne Lehman would have turned 65 years old this year. Her remains were found in 1971 in the woods along the Redwood Hwy just north of the Oregon/California border.

They say that investigators believe Lehman went missing from Aberdeen in the winter or spring of 1971 “under troubling circumstances”.

Their release states that some believe Lehman was a runaway and others feel she was abducted and traded to a criminal human trafficking organization.

These claims, how she ended up in Josephine County, and the cause and manner of her death remain under investigation.

If anyone knows of any information concerning Lehman, who was 16 at the time of her disappearance, and her activities in years 1970 and 1971, they ask that you contact the Josephine County Sheriff’s Office – Detective Ken Selig, phone 541-474-5123 case #71-940.

Sheriff Daniel would like to extend his sincere gratitude and thankfulness to all the employees and volunteers who worked on this case over the years.

These include not only members of the Josephine County Sheriff’s Office, but also the Oregon State Police, Oregon State Medical Examiner’s Office, NAMUS, The University of North Texas, and the National Center for Missing and Exploited Children, all of whom contributed to years of investigative and forensic investigation.

Follow the link below to the full Josephine Sheriff’s Office release.